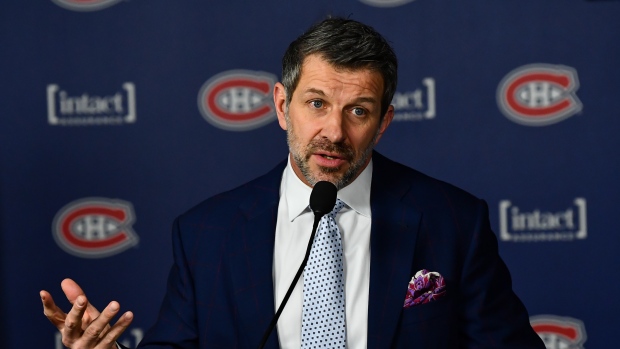 Bergevin, whose only notable unrestricted free agent signing on July 1 was backup goalie Keith Kinkaid, admitted Monday that there was risk in signing Aho, since the top names on the market would likely be off the board by the time the Hurricanes made their decision on matching.

“You know what? This shows to our fans that Geoff Molson, ownership, that we want to be a good hockey team. We want to win and we feel that this is the guy that we identified was going to help. He’s a young player. You take a risk when you do that,” Bergevin said on Monday.

“Like you mentioned, (other) guys are getting signed. But you can’t when you have that cap space tied up, you can’t go out and spend it and then you get the player and then you’re in that position. So you need to be smart. And that’s the risk we take. Yeah, the chair’s going to be gone by the time… but that’s the business we’re in. But we felt even though if it doesn’t happen we still have a very good hockey team.”

Sean Gordon of The Athletic argues the Canadiens appear to have taken a step backwards this off-season and believes the team should now put their cap space to use by signing free agent defenceman Jake Gardiner to boost their blueline. Gordon suggests the Canadiens could also dip into the trade market and points to Nikita Gusev of the Vegas Golden Knights and Minnesota Wild forward Jason Zucker as potential options.

Meanwhile, Ken Warren of The Ottawa Citizen writes that "speculation is" the Canadiens could circle back and work on an offer sheet for Tampa Bay Lightning centre Brayden Point. TSN Hockey Insider Pierre LeBrun reported Monday that the Canadiens first discussed an offer sheet scenario involving Point before opting to pursue Aho, believing they would have a better chance against the Hurricanes.

Point, who led all restricted free agents with 41 goals this past season and posted 92 points in 79 games, is also represented by Aho's agent, Gerry Johansson.

Hearing that the Habs first discussed the offer sheet scenario involving Brayden Point but then shifted gears to Sebastian Aho after thinking they'd have a better chance to get the player. Both Point and Aho are represented by agent Gerry Johansson.

To tender an offer sheet Point, the Canadiens would either have to sign him to a deal with an average annual value above $10.56 million, or wait until the Hurricanes officially match Aho's offer sheet, freeing their 2020 draft picks. The Hurricanes have until Monday to register Aho's contract.

According to CapFriendly, the Canadiens have $11.8 million in cap space with restricted free agents Artturi Lehkonen, Charles Hudon and Joel Armia in need of new contracts.