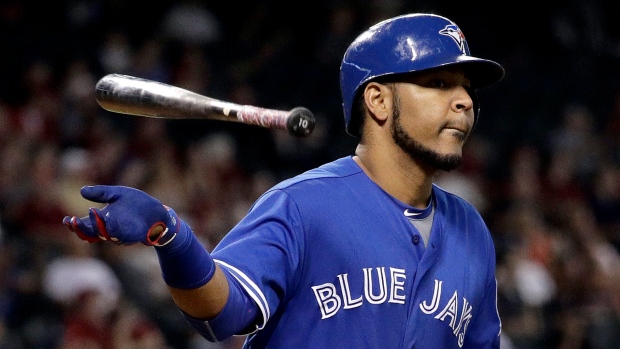 Edwin Encarnacion’s agent believes the Toronto Blue Jays first baseman will draw serious interest from as many as 11 teams and ultimately command a free-agent contract worth as much as $125 million over five years.

“He proved this year that he is a solid first baseman and I think that will make him attractive to National League teams as well [as those in the American League],” Paul Kinzer, Encarnacion’s agent, told TSN in an interview.

“The market will dictate what he gets, but I would like to see him get five years. [Baltimore Orioles first baseman] Chris Davis has seven years and $20 million [per season]. I think Edwin could be a $25-million guy.”

Kinzer said teams have already started contacting him about Encarnacion.

“They can call and talk but they just can’t make an offer,” Kinzer said. The official window for teams to make formal offers to free agents who aren’t their own opens Tuesday morning at 12:01 a.m. ET.

Host Scott MacArthur was joined by Gregor Chisholm from MLB.com and Richard Griffin of the Toronto Star to preview the Blue Jays off-season and free agency

The Blue Jays are likely to extend one-year, $17.2 million qualifying offers to Encarnacion and outfielder Jose Bautista. Both are expected to decline, meaning that the Jays will be entitled to compensatory draft picks if they sign with another team.

Canadian outfielder Michael Saunders is not expected to receive a qualifying offer from the Jays by the 5 p.m. ET deadline Monday afternoon.