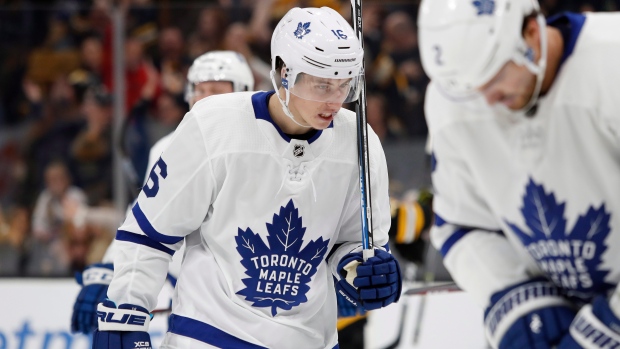 It appears Toronto Maple Leafs general manager Kyle Dubas will have to wait until after the season to try to re-sign pending restricted free agent Mitch Marner.

Marner's agent, Darren Ferris, told TSN Hockey Insider Pierre LeBrun via text on Tuesday that the winger remains committed to holding off negotiations until after the season.

“Yes, 100 per cent,’’ Ferris told LeBrun in an article published on The Athletic. “Mitch wants to concentrate on this season.’’

Marner leads the Leafs in scoring with 15 goals and 55 points this season and is one pace to top the 100-point mark. TSN Hockey Insider Darren Dreger said Tuesday that Marner's camp wants to see Leafs centre Auston Matthews sign his extension first, though there's a chance the duo could sign as a package deal.

"Potentially, but I can tell you this. Marner and his camp are committed to getting the Matthews deal done first before they get into the heavy negotiations with GM Kyle Dubas," Dreger said on Insider Trading. "That remains unchanged, that’s been their position effectively since Day 1.

"There are some who believe that the Maple Leafs would like to get Marner done on a six-year term at $8-9 million per season. Forget about it, that’s not happening. That’s way too light and maybe the Marner camp pushes back with a four-year contract position which would walk him into free agency. That’s not going to happen either, but Marner wants to make sure he’s got fair comparables and that includes whatever the Maple Leafs sign Matthews to."

The Maple Leafs are expected to face a salary cap crunch next season with Matthews and Marner among the 12 players on the roster slated for some form of free agency.

Kasperi Kapanen and Andreas Johnsson are also scheduled for restricted free agency, while defencemen Jake Gardiner and Ron Hainsey are set to hit the open market on July 1. According to CapFriendly, the team currently has $56.28 million committed towards the salary cap for next season, though that number includes Nathan Horton's $5.3 million cap hit, which can be shelved on long-term injured reserve.