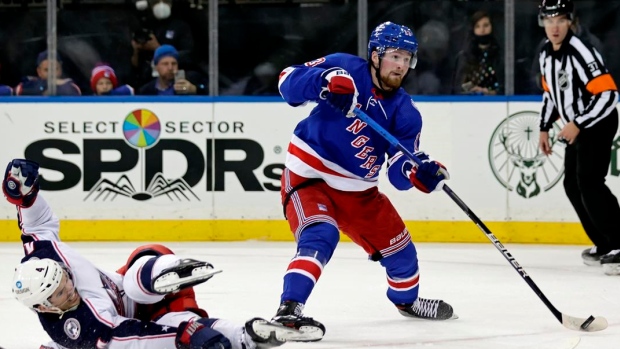 Alexis Lafreniere is used to being the best player on his team.

And he's often been the star of whatever league or tournament the ultra-talented winger happened to be dominating at a given moment throughout his young career.

Lafreniere certainly didn't expect the same in the NHL — especially right away — after being selected first overall by the New York Rangers in the pandemic-delayed 2020 draft.

Almost a quarter of the way through his second season, however, he also wouldn't mind seeing a couple more pucks hit the back of the net.

"You always want to contribute," Lafreniere said. "Points are good, but when you're playing good hockey and the team's winning, it's really all you need."

The 20-year-old has four goals and an assist through 19 contests this season following a rookie campaign that saw him score 12 times and register a respectable 21 points in a 56-game campaign played under difficult COVID-19 restrictions.

Lafreniere has one goal in his last 11 outings while averaging 12 minutes 18 seconds of ice time in a third-line role with New York, which sits third in the extremely competitive Metropolitan Division.

With established, skilled veterans ahead of him on the left side in Chris Kreider and Artemi Panarin, the native of Ste-Eustache, Que., is focused on other aspects of his craft as he strives to earn more opportunity.

"You've got to work on different things in your game ... I think I got better defensively," he said in a recent interview with The Canadian Press. "I've got to keep growing my game. Offensively, I can get better, too.

"There's a lot of good players on our team. Wherever I'm playing, just trying to bring my best and help the team win."

Those are sentences Lafreniere would have rarely uttered before the NHL.

He dominated the Quebec Major Junior Hockey League with 35 goals and 112 points in 52 games before the 2019-20 season was cancelled because of the pandemic.

Just the second back-to-back recipient of the CHL's player of the year award, following in the footsteps of fellow Rimouski Oceanic captain Sidney Crosby, Lafreniere was NHL Central Scouting's top-ranked North American skater and long-viewed as the consensus choice at No. 1 in his draft year.

He was also named MVP of the 2020 world junior hockey championship in the Czech Republic after leading Canada to gold.

Things haven't come as quickly or effortlessly with New York, but his head coach has no complaints.

"He's played good hockey for us. I like the way he's playing a more all-around game. We've got some top-end players. He doesn't get the first power play (time) ... that will come."

"It's not easy to play at a young age," said the 27-year-old. "I look back at myself and how different I am from today. People grow up ... not saying he needs to grow up, but that's just how you mature in life. He does the right things, he works hard.

"He's gonna be a great player in the league for a long time."

Lafreniere is also teaming up with Kraft Peanut Butter as part of its new "Protection for Peanuts" fund meant to help offset the cost of life-saving epinephrine injection pens, which run around $120 and need to be replaced every year.

The irony? Lafreniere is allergic to peanuts.

"It was weird," he recalled of the company's initial pitch with a smile. "I was like, 'I can't really eat peanuts, so it's not for me.'"

Lafreniere learned of his allergy during a routine childhood test and was always careful, but had a close call following the world under-18 hockey championships in 2018.

"I was coming back from Russia," he said. "I had peanuts. I didn't know it. That medication probably saved my life."

That scary moment well behind him, Lafreniere is enjoying life in the Big Apple — a place he'd never visited before being drafted.

"One of the best cities in the world," he said. "Playing at Madison Square Garden every night, it's unreal. And on off days just to be able to go in the city and just hang out a little bit, it's a lot of fun."

But he's still far from an expert when it comes to navigating bustling Manhattan.

"Still looking on my phone a little bit," Lafreniere said. "But in a couple of years I'll be fine."

He's banking on the same when it comes to life on the ice.

This report by The Canadian Press was first published Nov. 25, 2021