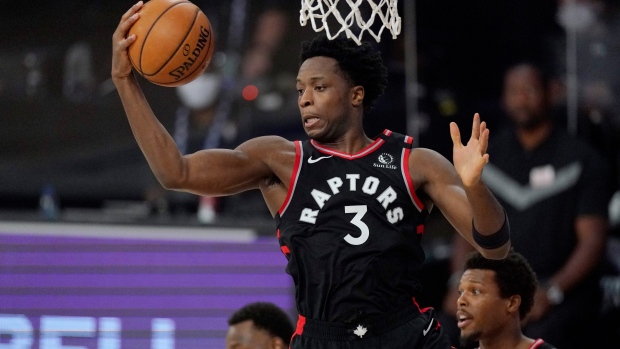 In many cases, as pundits around the NBA are putting together their annual preseason power rankings or prediction columns, Toronto – owners of the league’s second-best record a year ago – is slipping to the bottom half of the conference’s playoff picture.

Hey, no judgement. It makes sense. On paper, the Raptors aren’t as good as they were a couple weeks ago, and until they take to the court and the ball is tossed up, that’s all folks have to base their projections on.

Few would argue that going from Marc Gasol and Serge Ibaka – one of the league’s best tandems at the centre position over the past two seasons – to what they’ve got in the frontcourt now is an upgrade. The team itself probably wouldn’t attempt to make that argument.

In the hopes of preserving cap space for the highly anticipated summer of 2021, Masai Ujiri and the Raptors’ front office understood that they might need to take a small step back in the short term in order to, maybe, take a big step forward in July or August. Until we see how free agency plays out less than a year from now, it certainly appears as if they’ve taken at least a small step backwards.

However, the thing about this Raptors team is that they routinely defy logic. For years now, this has been a group that’s overcome the loss of important players and made a habit of exceeding expectations and proving people wrong. If they’re being slept on again, if they’re being picked to fall down the standings or even to miss the playoffs altogether – well, they should be familiar with what that feels like and know how to take it with a grain of salt.

Despite going 17-5 in the games that Kawhi Leonard missed due to injury or load management during the 2018-19 title-winning season, many believed the Raptors would take a nosedive after the Finals MVP left for the Clippers. Instead, they actually improved on their regular- season success in 2019-20, setting a franchise record for win percentage (.736) and pushing for 60 victories – a mark they were on pace to hit if the campaign hadn’t been shortened by the COVID-19 pandemic.

Not only were they able to excel without Leonard and Danny Green – their best player and another starter from the championship club – but they did it in spite of being one of the most injury-riddled teams in the league last season. Even before the halfway point, six of their top seven players had already missed at least 10 games apiece.

Regardless of who was in or out of the lineup, they seemed to find a way to win – the whole was always greater than the sum of its parts, a cause for encouragement going into the new campaign.

“I'm excited about what we've got,” recently re-signed guard Fred VanVleet said last week. “I think we're kinda headed back in the direction of where we were pre-Kawhi, where people are overlooking us again, which is not a bad place to be in. So, we've got a lot of work to do and we've got to get a lot better as individuals, and then we'll go out there and see what we can do. I'm excited. I can't wait to get back to work.”

With the Raptors opening training camp in Tampa – their temporary home – this week, Nick Nurse will have less than a month to get the team’s new players up to speed and essentially rebuild his frontcourt before the season tips off in late December.

The production of Ibaka and Gasol – as well as everything they brought off the court – will be missed, but the hope is that some combination of Aron Baynes, Alex Len, Chris Boucher and likely more small-ball units can fill the void.

Even if they can’t replicate Gasol’s passing and defensive prowess from the centre position, or Ibaka’s shot blocking and floor spacing, they believe they’ve got enough talent and depth at the other four positions to make up for it. Perhaps that’s something some people are missing when projecting how good this team can be in 2020-21.

They still feature one of the league’s premier backcourt trios in Kyle Lowry, VanVleet and Norman Powell. They have a pair of rising stars in Pascal Siakam – whose stock has fallen after a rough showing in the bubble, but will likely be on a mission to re-establish his upwards trajectory this season – and OG Anunoby. In Nurse, they’ve got a coach who has made a career out of getting the most from whatever team he’s given. His willingness and ability to roll with the punches – improvising and adjusting on the fly – has become a defining quality of this group.

There’s too much skill and way too much pride on this roster to expect a significant drop-off from last season, regardless of who walked out the door. Unless you believe that this is the year Lowry finally starts to look his age, or that Siakam has already hit his ceiling – and both of their track records suggest otherwise – you can probably see a path to replicating last year’s results.

Of course, merely treading water might not be good enough if the East has in fact gotten better. Milwaukee still features the league’s reigning two-time MVP, at least for one more year, and has upgraded the point guard position with the addition of Jrue Holiday. Boston’s young core has another year of experience – and a trip to the Conference Finals – under their belt. Miami is coming off a Finals berth, and the 76ers believe the changes they’ve made will better complement the duo of Joel Embiid and Ben Simmons. With a healthy Kevin Durant and Kyrie Irving, and with Steve Nash at the helm, the Nets fancy themselves contenders. Even perennial lottery teams like Charlotte, Atlanta and Chicago have added pieces and seem to be trending in the right direction.

For the Raptors to withstand the turnover in their frontcourt and hold off some of the East’s buzzier teams to remain a top-four seed in the conference, they’ll need their young players to take another step in their development this season.

Can Anunoby build off the elite two-way potential he flashed towards the end of last year? Will Siakam learn and bounce-back from his playoff growing pains, and continue to blossom in his role as the team’s top scoring option? At 26 and just entering his prime, does VanVleet have another gear? How will Boucher look in an expanded role?

“[Internal growth is] a huge part of how we built this team, dating back to our first couple years here, giving people opportunity,” general manager Bobby Webster said via videoconference from Tampa on Tuesday afternoon. “Whether it’s going from the third team to the second team or the second team to the first team, I think we got back to that a little bit this off-season.”

The optimistic view, factoring in the expected internal growth, is that this team should fare similarly to last year’s – with 50-plus wins and a top-four seed in the East. On the other side of the coin – if the makeshift frontcourt doesn’t hold up, or if the young guys don’t develop as quickly or as well as they hope – it’s also reasonable to envision a scenario where the Raptors fall to fifth or sixth in an improving conference.

Sure, if you’re looking for reasons to downgrade Toronto this season you’ll find them. But we’ve been down this road before. Count the Raptors out at your own peril.​