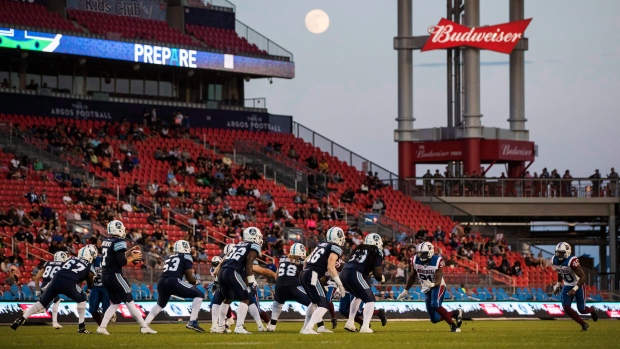 Next month, the Argos football operations department will relocate to BMO Field, the club's home field. The team will practice at Lamport Stadium — a short walk from BMO — and players will have access to a new weight room at nearby Ricoh Coliseum, where GM Jim Popp's staff will also call home.

Head coach Marc Trestman and his staff will also have their own offices at BMO. New president Bill Manning spoke Thursday of the move at the Argos town hall meeting with roughly 1,000 fans and supporters.

"It's actually been my No. 1 priority since being named team president," said Manning. "I had dinner with Jim and Marc and said, 'If there's one thing where I can help, tell me what that is.'

"Both of them universally said, 'We need a better training situation and a better environment.' For Jim and Marc, hopefully it allows them a better situation for the guys to win football games and so I'm really happy we were able to pull this together."

Popp told the assembled fans Argos practices at Lamport will be open.

Manning said the players, coaches and football-operations staff will make the move to their new digs upon Toronto's return from a bye week following its June 23 home opener against the Calgary Stampeders. That will be a Grey Cup rematch after the Argos upset the West Division champions 27-24 in last year's CFL title game in Ottawa.

"While they're not walking out of their locker-room directly on to a field, it (Lamport) is literally five minutes away," Manning said. "That just provides so much of a better situation for us.

"That was the driving impetus, for me, to help Marc and Jim. I think it's pretty cool they're going to be downtown and fans can come watch practices and see the team."

Last year, the Argos operated their practice facility at Don Boscoe High School but had to take a 30-minute bus ride to and from Downsview Park to practise. The travel time ate into the allotted daily time Argos coaches had their players.

Until the move is made, the Argos will continue practising at York University. The club's administrative offices will remain in downtown Toronto.

The new football operations home is the latest development in what's been an eventful off-season for the Grey Cup champions.

It also owns the Air Canada Centre and Maple Leaf Square and operates five other local sports facilities including BMO Field. Shortly after the acquisition, Manning, who's also the president of Toronto FC, was also named to the same post with the CFL franchise.

The deal was seen as a boon for the Argos, given MLSE's financial scale and experience operating multiple sports entities. Last season, Toronto averaged under 14,000 spectators at BMO Field which has a seating capacity of about 26,000.

One move MLSE did make was to roll back the average ticket price 23 per cent. So about 2,600 tickets will be sold for as low as $15 per game for season's seat holders and $19 per game for single-seat buyers.

The Argos will sell tickets in the lower bowl first and keep the upper deck on the east side empty, that is, unless demand to fill those seats increases.

Manning joined the Argos with no previous CFL experience but has worked in pro football. He served as the vice-president of sales for the NFL's Philadelphia Eagles (2004-08).

"The Philadelphia Eagles are one of the best-run franchises in the NFL," Manning said. "I didn't work on the football ops side but I was in charge of sales and services and it was a great opportunity for me to see how a football team operates and how you engage with your fanbase and how passionate the fans are.

"But I also got the chance to know our GM Tom Heckert well and this was when Andy Reid was the coach and I got to know a number of his assistants and see how they operated. I actually lean back on that and I think it's going to help me greatly."

As the hands-on president of two pro sports organizations, there are questions regarding how Manning will divide his time.

"It's something for me that's really come fluid," he said. "The one thing I think I've done a very good job of in my career . . . is compartmentalize and I've been good at prioritizing.

"Whatever are the most important things at the moment I'll make sure get done . . . and a number of my staff will work with both teams. My time is, I joke, 24-7, but it's something I'm really excited about."