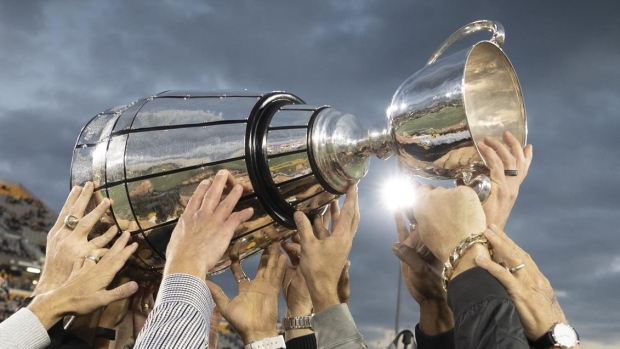 Arkells are preparing for the Grey Cup's halftime show just like the players that will compete in the CFL's championship game.

The Canadian rock band was announced as the halftime performers for this year's Grey Cup on Friday night. Lead singer Max Kerman said that he and his bandmates have been preparing for the intermission show on Dec. 12 by watching game tape.

"We're looking at performances from the Super Bowl halftime show, like Prince or Springsteen or Bruno Mars, or Grey Cup performance like Keith Urban a couple of years ago was incredible," said Kerman, who also mentioned Kanye West's performance at the Brit Awards.

"What tricks can we steal from those artists? And then how do we amalgamate all those ideas into something that Arkells would do?"

Planning a halftime show was a unique creative opportunity for Arkells, according to Kerman. He said that when the band first formed in 2006 when they were at students McMaster University the challenge was just to feel confident at a small bar.

Since then they've pushed themselves as both musicians and performers, and to take the stage at Tim Hortons Field on national television is another new challenge.

"It's an amazing artistic project to take on as a band," said Kerman. "You know, creating a set list and putting on a live show is one endeavour that we're pretty familiar with. We've gotten good at it, I think, over the years.

"But creating a 15-minute performance for television is an entirely different ball game. No pun intended."

It will be something of a homecoming for Arkells, who are named after Arkell Street in Hamilton's Westdale neighbourhood, near McMaster where the original five band members all went to school. They're also familiar with the Grey Cup venue, drawing 24,000 fans to Tim Hortons Field for a concert in June 2018.

"We know the venue staff, we know that the folks in the front office with the Ticats, we know that people at city hall in Hamilton," said Kerman, a self-described Tiger-Cats fan. "I know how much effort has been put into making this year's Grey Cup really special."

It will be the first Grey Cup in two years as the COVID-19 pandemic forced the CFL to skip the 2020 season. It's also the first time the championship game has been held in Hamilton in 25 years. The southern Ontario city last hosted the Grey Cup in 1996 at Ivor Wynne Stadium.

“The point of our band has always been to bring people together,” said Kerman. “Canadians from coast-to-coast will descend on Hamilton for this event, and millions across the country will be taking it in from home.

"After the challenges of the past 20 months, we’re honoured to be the band that gets music and sports fans back to singing and dancing."