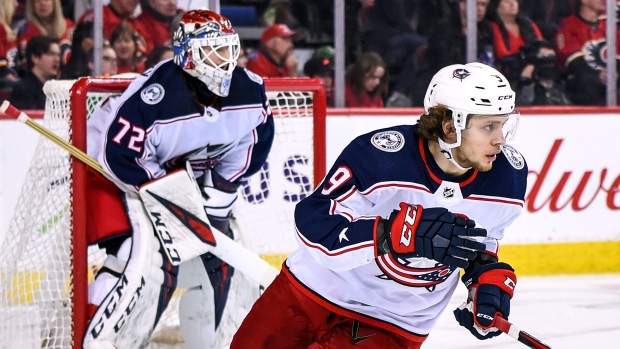 The period to speak to pending unrestricted free agents opens Sunday and the Florida Panthers aren't wasting any time making their pitch to potential targets. TSN Hockey Insider Bob McKenzie reported free agents Sergei Bobrovsky and Artemi Panarin will be in Florida Monday to meet with the Panthers.

McKenzie added the Panthers would like to sign both players but need a goalie more than a forward so the priority may be Bobrovsky.

After going undrafted, Bobrovsky started his NHL career with the Philadelphia Flyers in 2010. The Russian goaltender was traded to the Blue Jackets in 2012 for a package of draft picks. Bobrovsky has two all-star appearances and two Vezina Trophy’s.

Bobrovsky is coming off a four-year $29.7 million contract.

The 27-year-old Panarin scored 28 goals and posted a career-high 87 points in 79 games with the Columbus Blue Jackets this past season. He added five goals and 11 points in 10 playoffs games as the Blue Jackets picked up their first ever series victory, upsetting the Tampa Bay Lightning with a first-round sweep.

He spent the past two seasons with the Blue Jackets after being traded from the Chicago Blackhawks in the summer of 2017 for a package that included Brandon Saad.

After playing in the KHL from 2008-15, Panarin won the Calder Trophy with the Blackhawks in 2016 after scoring 30 goals and posting 77 points in his first NHL season.