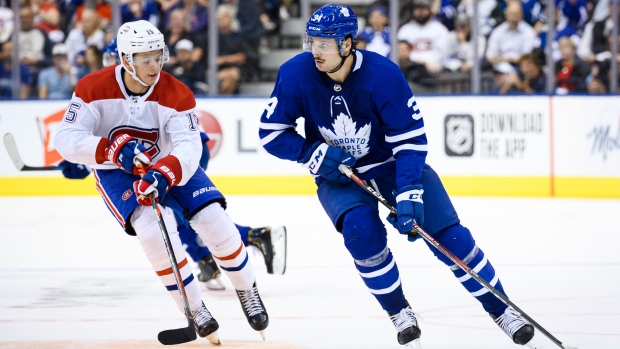 TORONTO — Auston Matthews stood at the backdrop in the Toronto Maple Leafs' locker room answering a series of questions about his team's latest pre-season performance.

Then the conversation turned to what was on everyone's mind — the charge of disorderly conduct and disruptive behaviour the star centre faces stemming from an alleged incident in Arizona back in May.

The story had been dominating chatter across the city and much of the hockey world for more than 24 hours, and Matthews finally opened up after scoring in Wednesday's 3-0 victory over the Montreal Canadiens.

Matthews made a brief statement to an unusually large contingent of reporters for a pre-season game at Wednesday's morning skate, but didn't take any questions.

Matthews admitted after the game he kept the situation from the team, including general manager Kyle Dubas, who found out about the allegation on Twitter.

"That's just an error in judgement on my part," said Matthews.

In terms of action on the ice, Frederik Andersen made 26 saves, Trevor Moore added a goal and an assist, and John Tavares also scored for Toronto in Wednesday's victory. Mitch Marner chipped in with two assists.

"I've been feeling good so far in camp," said Andersen, who's stopped 62-of-63 shots in seven periods of exhibition action. "Continuing working day by day. It's been paying off."

The Leafs dressed what should largely amount to their NHL lineup — minus injured forward Zach Hyman (knee) and defenceman Travis Dermott (shoulder) — when they open the regular season Oct. 2 at home against the Ottawa Senators.

"If we can build momentum off each other, that's the way we want to play," Tavares said of getting the group playing together. "When we have success we're doing things fast, doing things quick."

The Canadiens, meanwhile, had about half of what's expected to be their roster when they kick things off Oct. 3 in Carolina against the Hurricanes. Starting goalie Carey Price and top-6 forward Max Domi were among the players left at home Wednesday.

Montreal and Toronto will meet for real Oct. 5 back at Scotiabank Arena on the first Saturday night of the 2019-20 schedule.

The Leafs, who saw Jake Muzzin and Jason Spezza hit each post behind Kinkaid in quick succession less than three minutes in, pushed ahead at 7:57 of Wednesday's first period. Moore slid his second of the pre-season and second in as many games past Kinkaid after the Montreal netminder was contacted by Alexander Kerfoot, who was battling with defenceman Mike Reilly in front.

Canadiens head coach Claude Julien might have challenged the play for goalie interference, but video review wasn't available at Scotiabank Arena for the game.

Andersen made a good stop on Brendan Gallagher from in tight on a Montreal power play later in the period before the Leafs went up 2-0 with 3:41 left.

Playing his first game at home since signing a six-year deal worth more than US$65.3 million to end his contract impasse with the Leafs at the start of camp, Marner wheeled with the puck down low before it fell to Tavares, who scored his second of the exhibition schedule on a bank shot from below the goal line.

Andersen stopped Phillip Daneault on a short-handed 2-on-1 rush in the second period as the Canadiens started to find their groove. The Toronto netminder then turned aside consecutive Shea Weber blasts on a Montreal power play.

The Canadiens appeared to get within one with 6:41 left in the second, but Charles Hudon's effort was immediately waved off because the puck was kicked in.

Kinkaid did a good job to keep his team within two eight minutes into the third when he outwaited Marner in close, but could do nothing on the winger's slick feed to Matthews for his fourth of the pre-season on a power play at 8:55 that made it 3-0.

Marner then hit the post with just over a minute to go on a shot that stayed out.

Toronto defeated Montreal on Monday 3-0 at the Bell Centre with a mostly American Hockey League roster in front of presumptive backup Michael Hutchinson, who finished the night with a 38-save shutout.

The Leafs have games against the Detroit Red Wings on Friday and Saturday to wrap up their pre-season schedule. The Canadiens' exhibition finale goes Saturday in Montreal against Ottawa.

This report by The Canadian Press was first published Sept. 25, 2019.