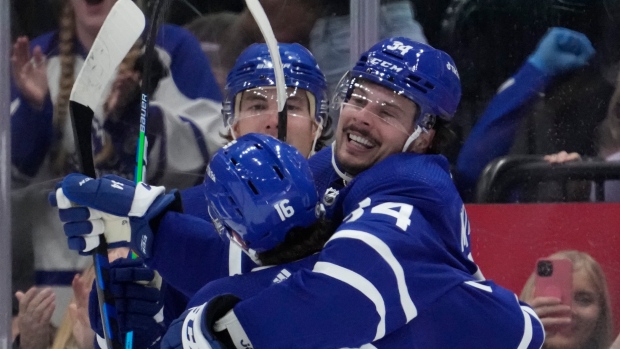 TORONTO — Amidst the celebrations after Auston Matthews scored his 58th goal of the season – just 27 seconds after bagging No. 57 – veteran Maple Leafs forward Jason Spezza glanced back at his head coach.

"Spezz turned around and gave me the eyes like, 'This is something special,'" Toronto's Sheldon Keefe said.

This night – and many others as the Leafs' talisman continues to rewrite history.

Matthews scored twice in the first period to pad his NHL lead and join some elite company Saturday in Toronto's 3-2 victory over the Montreal Canadiens.

Two days after setting the franchise record for goals in a season, the 24-year-old superstar's opener against his team's fiercest Original Six rival marked his 50th in his last 50 games to become the first player to accomplish the feat since Mario Lemieux in 1995-96.

"I don't really have too many words for that," Matthews said of being mentioned in the same breath as Super Mario. "It's pretty surreal. He's one of the best players to ever play.

Matthews extended his point streak to 16 games (21 goals, 10 assists) as the Leafs clinched a playoff spot for the sixth straight season and reached 100 points in the standings with 10 contests left on the schedule.

"He's doing something special right now," said defenceman Morgan Rielly, Toronto's longest serving player. "To be a part of it is a lot of fun."

Mitch Marner – Matthews' partner in crime on the top line – set up his teammate's first goal to extend his point streak to 13 contests (eight goals, 20 assists).

Cole Caufield and Joel Edmundson replied for Montreal (20-41-11). Jake Allen stopped the first 14 shots he faced before leaving with an apparent leg injury as he stretched in vain for Matthews' first. Sam Montembeault made 23 stops the rest of the way.

Matthews set Toronto's single-season record for goals when he scored for the 55th and 56th time in 2021-22 in Thursday’s 4-3 overtime victory in Dallas.

Rick Vaive, who held the franchise mark of 54 goals in a campaign for 40 years, was on hand at Scotiabank Arena earlier Saturday to offer his personal congratulations.

"He had some really nice words," Matthews said. "Guys like him that have come before us really paved the way and showed what it really means to be a Toronto Maple Leaf.

Matthews is now on pace for 67 goals in his 77-game season – he missed three contests with a wrist injury and two via suspension – and could become the first player to score 65 since Alex Ovechkin in 2007-08.

"It's very special to be part of this team and to be able to watch him put up the amount of goals he's done this year," Kallgren said.

Steven Stamkos was the last NHLer to get to 60 when he reached the milestone in 2011-12.

Matthews was surprised to be honoured during Saturday's first TV timeout for eclipsing Vaive. He rose to his skates on the bench, tapped his chest and acknowledged to the adoring crowd at Scotiabank Area.

The No. 1 pick at the 2016 NHL draft then got raucous "M-V-P!" chants as the night wore on following his offensive outburst.

"You get chills in your bones," Matthews said with a grin. "It's definitely a cool feeling. This is a special place to play.

"We're trying to build towards something special here."

The rebuilding Canadiens, who downed the Leafs in their last two meetings at the Bell Centre, weathered an early barrage before Matthews struck at 13:32 of the first after Toronto defenceman Mark Giordano's centering pass off the rush ticked off Edmundson. Allen contorted his body to make the initial save, but the puck fell kindly for Matthews to bury his 50th in 50 games to match Lemieux.

"It's fun to see it front-row and be his linemate and be his friend," said winger Michael Bunting, the third member of the Leafs’ top trio. "I couldn't be happier for him. He's such a good guy off the ice and he's such an exceptional player."

Montembault replaced the ailing Allen, but could do nothing on the first shot he faced when Matthews wired his 58th under the netminder's glove moments later.

"It's never easy to come in cold," said the netminder. "I might have been better off getting the first one from someone other than Matthews."

William Nylander then hit the post on a Toronto power play before Kallgren had to stop Nick Suzuki's short-handed chance and a Caufield breakaway out of the penalty box.

"Kally made some really big saves when we had little hiccups," Matthews said.

Montembault came up with a couple nice stops to keep the score at 2-0 early in the second before Montreal got on the board. Caufield made an incredible play to keep the puck in at the Leafs' blue line to extend a sequence that eventually saw Edmundson score his second at 5:58.

Tavares, whose team is in a battle for Atlantic Division playoff positioning, scored his 26th at 8:07 on a shot that went in off Canadiens defenceman Jordan Harris to make it 3-1.

But Montreal, which upset Toronto in the first round of last season’s playoff to kickstart an improbable run to the Stanley Cup final, got back within one with 1:57 left in the period when Caufield buried his 18th.

The Leafs' top-ranked power play got a 5-on-3 opportunity for 1:44 with under 10 minutes to go in regulation, but couldn't connect before the visitors also had a late, fruitless man advantage that was extended to a 6-on-4 with Montembeault on the bench for an extra attacker.

But the night, once again, belonged to Matthews.

"He's clearly not satisfied," Keefe said. "He's continuing to push himself and our team."

This report by The Canadian Press was first published April 9, 2022.