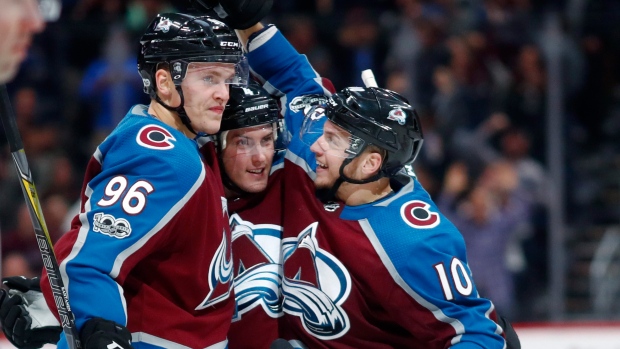 DENVER — The Colorado Avalanche went all of last season without a winning streak of at least three games. It took them just five games get there this time around.

Jonathan Bernier had 17 saves against his former team and Mikko Rantanen and Sven Andrighetto had two assists each for the Avalanche. Colorado (4-1) is off to its best start after five games since 2013-14 thanks to this three-game winning run.

The Avalanche got a scare when Nathan MacKinnon left with a right eye injury in the first period. MacKinnon was hurt when Anaheim's Derek Grant got his stick under MacKinnon's visor at 13:52 of the period. MacKinnon was on the ice for a while and was helped off by a trainer, but coach Jared Bednar said he was fine and expected him to play in Dallas on Saturday night.

"It hit him right in the eye and, yes, he had to come out of the game, but I think we're fortunate," Bednar said. "It looks like he'll probably play tomorrow."

The Avalanche are already without Tyson Jost due to a knee injury.

Brandon Montour had a goal and Reto Berra had 19 saves in relief of John Gibson, who left with an upper-body injury after making 17 saves in first period.

"He actually got hurt in warmup," Anaheim coach Randy Carlyle said. "Just got injured on a shot in warmup. It was OK and got to the point it wasn't safe, he didn't feel good and said he wasn't good to go."

Berra was sharp in his first action of the season, but Barrie got the winner on Colorado's eighth power play when his slap shot from the point beat his former teammate at 14:21.

The Ducks were called for six slashing penalties, including Montour's that preceded Barrie's goal.

"We've got to learn, the slashing penalties that we took tonight are new hockey rules that are being enforced," Carlyle said. "You cannot slash or touch anybody with your stick in the hand area or the stick area."

Colorado was dominant with and without MacKinnon. The Avalanche outshot the Ducks 18-4 in the first period and continued to control the play in the second, but managed just one goal in six power-play chances.

Cam Fowler took a penalty when he slashed Andrighetto on a breakaway 38 seconds into the third, but the Ducks were the ones to capitalize when Montour beat Bernier with a shot from the slot at 2:14.

Landeskog gave Colorado a 1-0 lead with a power-play goal at 11:58 of the first period.

Colorado thought it had two more goals but both were waved off for goaltender interference. The first happened when Matt Nieto appeared to score at 2:02 of the second, and a replay review upheld an interference call on the ice.

The second one came midway through the third when rookie Alexander Kerfoot went to the net and obstructed Berra as a shot from the point went in.

NOTES: Anaheim centre Ryan Getzlaf, who missed the first two games of the season with a lower body injury, was a late scratch. The Ducks said he was day to day. ... Jost was out of the lineup with a left knee injury from Wednesday's win over Boston. Jost will also miss Saturday's game in Dallas but is not expected to miss extended time. ... Anaheim LW Nick Ritchie returned to the lineup after missing three games with a lower body injury.