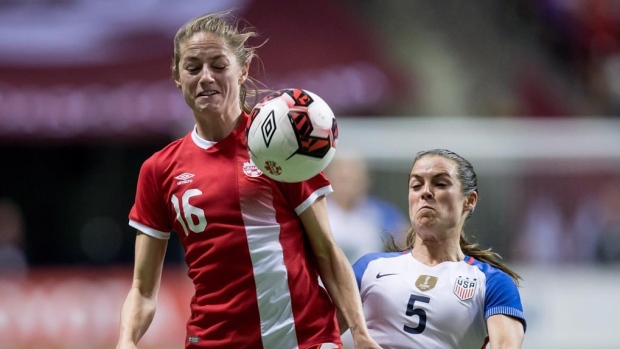 Faced with a decision to keep playing her club football in Europe or return closer to home, Janine Beckie says the choice wasn’t easy, but it also wasn’t agonizing.

“I was lucky that I was in a position where I couldn't have really made a bad decision, which is what everybody wants as a player,” the Canadian international told TSN.

Last Friday, Beckie signed a long-term contract with the Portland Thorns of the National Women’s Soccer League after spending the past four years with Manchester City.

The move marks a return to the NWSL for Beckie, who played her first three years as a professional in the U.S.-based league from 2016 to 2018. She played for two seasons with the Houston Dash after being selected eighth overall by the club in the 2016 NWSL Draft and made 15 appearances for Sky Blue FC (now NJ/NY Gotham FC) in 2018 before making the move to England.

“At this at this point in my career, I think it's a great time for me to come back to the league,” Beckie said. “The league has come a long way since I left, and with the experience that I got in Europe, I think it’s kind of the perfect storm to come back. I'm looking forward to it and I can't wait to get started.”

Beckie, who inked a three-year deal with the Thorns with an option for a fourth season, is set to join the club on April 18, and hopes to make her debut shortly after that. She said the process of signing with the club happened “pretty quickly” after Portland acquired her NWSL rights from Racing Louisville in exchange for $75,000 in allocation money.

The 27-year-old forward said she had a couple of options from other clubs in Europe, but ultimately felt that a return to North America was the right fit at this point in her career.

“I wanted to be a bit closer to home, get hopefully loads of playing time if I go there and perform,” Beckie, a native of Highlands Ranch, Colo., said. “I think just in terms of World Cup qualifying the summer, World Cup next year, I wanted to be in an environment where I feel like I could be really successful with minutes, [get] results in a highly competitive league where there's not any game where you’re blowing out a team six, seven-nil.”

Beckie joins a growing Canadian contingency in Portland with general manager Karina LeBlanc and head coach Rhian Wilkinson, both former Canadian internationals who combined for more than 200 caps. She said part of the appeal of Portland was playing for a coach she’s familiar with. Wilkinson played with Beckie for several years on the Canadian national team and was also a part of the Canadian staff.

“Janine expressed her desire to come to Portland to play under Rhian, which is a testament to the groundwork Rhian has laid in establishing herself within women’s soccer,” LeBlanc said in a team statement. “Janine is a top sought-after international player that brings valuable experience at the club level, playing abroad and in the NWSL, and we are thrilled to have her in Portland.”

The move also unites Beckie with Canadian captain Christine Sinclair, who has been with the Thorns since the club’s inaugural season in the NWSL in 2013. Beckie said she didn’t have many conversations with Sinclair about Portland, but the Thorns’ captain has always spoken highly of the city.

“It's obviously boded well for her and her career to play there and has made her substantially a better player, I think, since she joined the Thorns a long time ago,” Beckie laughed. “That was one of the big reasons why I did want to go – to play with her while she finishes her career.”

On social media, Beckie has openly shared her love for Manchester, its fans, and her teammates. She wrote a heartfelt goodbye to the club, but says the full impact has yet to hit her. Just days after her deal with Portland was announced, Beckie flew back to Canada to join the national team for a pair of friendlies against Nigeria.

“I think the nature of the decision and how fast that happened was helpful in terms of removing a bit of the emotion from it,” she said. “To be honest, I haven't really had a chance to think about it in a way that makes me feel very emotional. But I know that when the dust settles, and when I get settled in Portland and things aren't as crazy, moving across the world, I'll definitely feel that emotion very heavily. It's a place that's very, very special to me.”

Beckie featured in 90 games across all competitions during her four-year tenure with City, scoring 23 goals. She won four trophies with the club (two Women’s FA Cups and two League Cup titles) and scored the winning penalty in the final of the 2019 League Cup.

While the trophies will stay with her, Beckie says her most cherished moments came off the field.

“The relationships that I built with people that I know that I'll stay in very good touch with, and just experiencing European culture living in another city - that's one of the beautiful things about sport is that it can bring you all over the world,” she said.

“I feel like I've grown up a lot in the last four years. I’ve faced really difficult circumstances in the game in terms of going there, not knowing what I was going to get, a different style of play, a different level of expectation.”

But along with the highs, Beckie experienced her share of lows during her time with City. She had to fight for playing time, especially in the last few months leading up to her decision to leave.

“I think it was just an incredible learning experience for me to play in that league as it develops, play with some of the top players in the world day in and day out, and then have those struggles as well, where I was trying to find myself as a person,” she said.

Manchester City fans would often note Beckie’s lack of playing time on Twitter. During one notable stretch this year, she didn’t see the pitch at all for City from Jan. 29 to Mar. 13. But Beckie maintains she has a great relationship with coach Gareth Taylor.

“I think it's difficult for the outside world to see that because all they see is maybe a lack of playing time,” she said. “But he's a fantastic guy... I think what I admire so much about him is that he stuck to his ways. We had a really, really tough start to the season and he never wavered from the way that he wanted us to play, his expectations for us.

“No animosity, no bitter feelings. I've learned a lot from him, and definitely someone that I'll keep in touch with.”

While Beckie hasn’t always found success at the club level, she has been a star for Canada. In 86 appearances (72 starts), she has recorded 34 goals, tied with Kara Lang for fourth-most all time.

“I think to get the best out of Janine, she has to know you believe in her,” head coach Bev Priestman told TSN earlier this week. “I think we've seen that, right? You give her a shot. She takes it, she scores for Canada. She knows how much Canada loves her.”

It’s a sentiment Beckie agrees with, even though that wasn’t always the case.

“I think I've tried to get away from needing that validation – whether it’s coaching staff, teammates, whatever – to perform,” Beckie said. “I think I've found that in spells in club environments. I think in England, specifically in Europe, it's a difficult footballing culture to have that feeling consistently, unless you're really playing outstanding. So, I think that I used to see it as a negative that I needed that value and love. But I think I've accepted that that's what gets the best out of me.”

Beckie hopes this move to Portland will provide an environment like the one she has with the national team, and one where she can truly thrive.

“I think I'm the type of player that’s proved in my career that if you keep me on the field long enough, I'll produce for you,” she said. “I've had a lot of inconsistency in my club career. I think that's one thing that I'm looking to change going to Portland.”