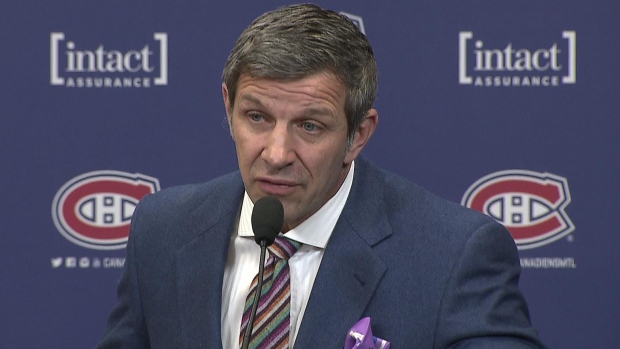 The pressure is on in Montreal after the Canadiens were soundly beaten 4-1 by the rival Boston Bruins Wednesday night, dropping the Habs three games below .500 and nine points out of a Wild Card spot.

“There are assets that Bergevin could consider moving out,” Dreger said. “You’re talking about Max Pacioretty, that rumour has been out there now for several weeks. You’re talking about Andrew Shaw, who is a gritty competitor who has playoff experience with two Stanley Cup rings and some term on his contract, even though he's just 26-years-old. And Alex Galchenyuk is another asset Bergevin could consider moving out.”

Pacioretty, who’s spent his entire NHL career with the Canadiens, has one year left on his contract after this season at $4.5 million. The 29-year-old has 12 goals and 13 assists in 45 games this year.

Shaw, who was acquired from the Chicago Blackhawks ahead of the 2016-17 season, has four years left on his contract at $3.9 million per season. Shaw has 10 goals and nine assists in 40 games for the Habs this season.

The 23-year-old Galchenyuk just signed a new three-year, $14.7 million deal ahead of this season. The third overall pick in the 2012 Draft has 11 goals and 15 assists in 45 games for Montreal this season.

“It’s white-hot in Montreal and I think that is an understatement right now, so we’ll see whether or not he’s feeling the pressure. There are suitors that are interested in those players.”

One of the Canadiens’ most glaring problems is their lack of a first-line centre. An obvious solution would be New York Islanders’ star John Tavares, should he hit the open market this off-season. Dreger said that while Tavares leaving the Islanders is unlikely, the Habs have no choice but to be ready just in case.

“It’s a pipedream. I’m still in the camp that believes that Tavares and the Islanders are going to find that middle ground. He’ll stay and quite possibly finish his career with the Islanders.”

“In Tavares you have to be all-in if you’re the Canadiens, you’re so desperate up the middle of the ice. I had an NHL executive tell me earlier this week that he believes that if Tavares goes to market, someone is going to offer a seven-year term at $15 million per season. If you’re the Canadiens with $9 million in cap space right now, and that’s going to grow in the off-season, if he hits the market, you need to be one of those teams ready to pony up that kind of dough.”