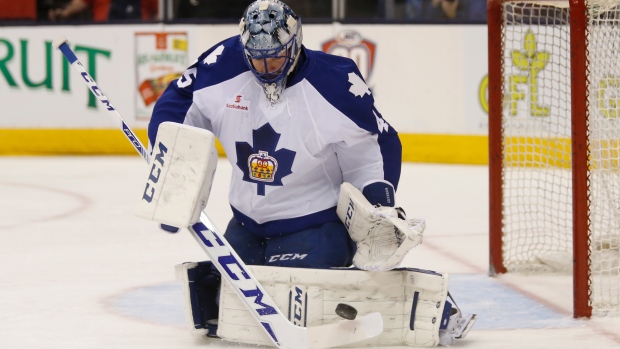 TORONTO - Jonathan Bernier stopped all 21 shots he faced and Josh Leivo had a goal and three assists to lead the Toronto Marlies to a 9-0 victory over the Manitoba Moose on Sunday in American Hockey League action.

Bernier, who's with the Marlies on a conditioning stint, collected his second straight shutout at the AHL level. He blanked the Rochester Americans 4-0 Friday night in his first start with the team.

The goaltender struggled through his first nine starts with the Maple Leafs this season, going 0-8-1 with a 3.28 goals-against average and .888 save percentage, numbers that ranked among the worst in the league.

Bernier was starting in familiar territory on Sunday as the game was held at Air Canada Centre, the home of the Maple Leafs.

William Nylander scored one goal and set up two more for the Marlies (18-5-1), while Andrew Campbell, Mark Arcobello and Richard Clune — while shorthanded — had a goal and an assist apiece. Brendan Leipsic and Frederik Gauthier also scored.

Jussi Olkinuora made 25 saves for Manitoba (5-14-2), which has dropped three straight games.

Toronto was 1 for 3 on the power play while the Moose failed to score on two chances with the man advantage.