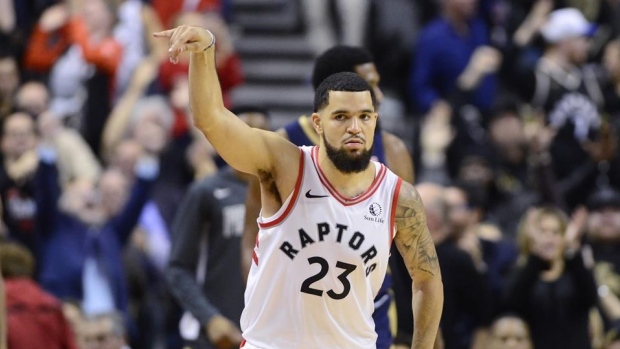 TORONTO – By now, you’re undoubtedly familiar with his story. It’s one of the greatest in all of sports.

Four years ago, Fred VanVleet hosted a viewing party for the 2016 NBA draft. He hoped to realize a lifelong dream and hear his name called that night. Instead, after being passed over by all 30 teams – most of them multiple times – he took the microphone and addressed a room full of his disappointed family and friends.

"So, I had a chance to get drafted, but they [were] talking about putting me in the D-League for two or three years," the accomplished, yet clearly underappreciated four-year point guard from Wichita State told them.

"I turned those down. I bet on myself… My story don’t end here. It’s just the beginning. It wouldn’t really make sense for my story if I did get picked. I’ve been against the odds my whole life, and it’s not going to stop me."

Two years later, after fighting his way onto the Raptors’ roster and then eventually into their rotation, VanVleet hoped to cash in as a restricted free agent. He showed promise in his sophomore season, finishing third in Sixth Man of the Year voting, but found that the market for point guards was cold.

So, he agreed to a short-term deal with Toronto, setting himself up to hit the market in a couple years – this time as an unrestricted free agent about to enter his prime. He bet on himself, again.

A lot’s happened since then, personally and professionally. VanVleet became a Finals hero and won an NBA championship. He became a father, twice. And a global pandemic rocked the league – and its finances – hard, creating some uncertainty as to what his, and every other free agent’s market would look like heading into this off-season.

However, on Saturday afternoon those bets paid off, and paid out. As first reported by The Athletic, and later confirmed to TSN, VanVleet agreed to a new contract with the Raptors. After making just south of $20 million over his first four NBA seasons, combined, he’ll earn $85 million over his next four.

It’s a mutually beneficial deal that makes sense for both parties. The value and term are in line with comparable players at his position – it’s identical to the contract Pacers point guard Malcolm Brogdon received in the sign-and-trade that sent him from Milwaukee to Indiana last year, which was something of a template in these negotiations.

Negotiations were brief and fairly straightforward, though, according to a source. While VanVleet spoke with a few other teams and took some time to weigh his options after free agency opened Friday evening, and through Saturday morning – as you would expect from a business savvy player making one of the biggest decisions of his life – he knew where he wanted to be.

His recent comments on J.J Redick’s podcast – that he plans to "cash out" – shouldn’t have come as a surprise, knowing him and his story. They certainly didn’t to the Raptors, who knew they would have to come to the table with a competitive offer that showed they were serious and valued VanVleet accordingly.

The Raptors never felt the need to play coy. They made their intentions clear, both privately and publically – retaining VanVleet was their top priority this off-season, and they treated it as such.

It’s hard to imagine this Raptors team without VanVleet. With his leadership, toughness, winning pedigree and intelligence, he’s become such a crucial part of the culture – both on and off the court.

Coming off a career season – one in which he started all 54 games he played, led the league in deflections per contest, and averaged personal bests across the board (17.6 points, 3.8 rebounds, 6.6 assists and 1.9 steals) – he’s proven himself to be an elite two-way guard.

Despite being undersized – generously listed at 6-foot-1 – he’s blossomed into one of the league’s premier defenders at his position and has shown he can run an offence or play off the ball, which is important with his friend, mentor, and backcourt partner Kyle Lowry going into the final year of his deal and about to turn 35. And, at 26 himself, he still has room to grow as a player.

The concerns about his size and upside that caused him to go unselected in the 2016 draft seem laughable in hindsight. Just four years into his NBA career, VanVleet is already a quality starter and, at worst, the third-best player on one of the East’s top teams. Provided he takes another leap or two during the life of this contract – which is a safe assumption, given his track record – an all-star trajectory is within reach.

In that regard, retaining him at salary just over $21 million annually also feels like a win for the Raptors. That was likely where a VanVleet deal would fall, but the fear for Toronto was that an interested team with cap space and a need at the guard position – like the New York Knicks – would bump that price up.

At $85 million over four years – the final season is reportedly a player option – the Raptors get their man and should be able to bring back at least one of their bigs – Serge Ibaka or Marc Gasol – while also maintaining their coveted cap space for the highly anticipated 2021 off-season.*

How much they’ll have to spend on next summer’s loaded free agent crop – that could include the reigning two-time NBA MVP Giannis Antetokounmpo – will depend on if they extend OG Anunoby ahead of this season, and for how much, and whether Norman Powell opts out of his deal after the campaign. However, locking in VanVleet at a manageable number should give them the flexibility they’ll need to add to a core that will feature the Rockford, IL native and Pascal Siakam, who they inked to a max contract extension last year.

Given everything they’ve achieved together over the past four years, and considering how synonymous they’ve become with one another, it’s seems fitting that VanVleet will remain a Raptor for the foreseeable future.

It shouldn’t be hard to root for a player and a person like VanVleet, or to appreciate how special this moment must be for him and his family. He’s worked hard for it, treated people the right way, and in spite of the odds, his self-belief never wavered. His story still isn’t over, even if it’s time to cash in a few bets.​

*Editor's note: According to multiple reports, Ibaka agreed to a two-year deal with the Los Angeles Clippers later on Saturday.