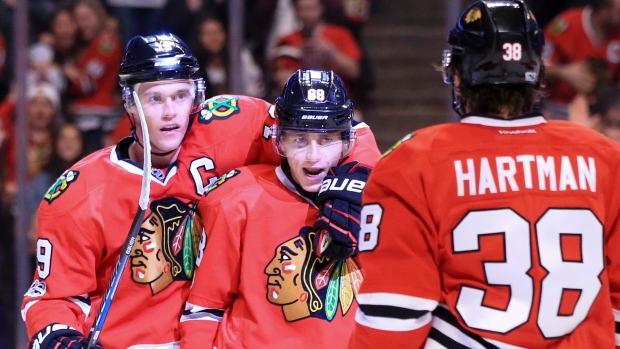 CHICAGO — The Chicago Blackhawks enjoy an uncustomary luxury with space under the NHL's $79.5 million salary cap.

So general manager Stan Bowman hinted Saturday on the second day of the team's annual convention he could be in the market for a veteran player who might help the Blackhawks return to the playoffs.

Chicago's roster is built on big-name stars including Patrick Kane, Jonathan Toews, Duncan Keith, Brent Seabrook and Corey Crawford who are locked into hefty long-term contracts. Those deals usually have forced Bowman to scramble to get his team under the cap.

But this year, the Blackhawks have between $5.5 million and $6.5 million of wiggle room according salary cap tracking websites CapFriendly.com and spotrac.com.

"This is the first year that I can remember where we've had this much cap room," Bowman said. "We have a bit more flexibility than we have had in the past."

Most of that space opened when Bowman traded Marian Hossa and his $5,275,000 cap hit to Arizona earlier this month. The 39-year-old forward didn't play last season because of severe side effects from medication to treat a progressive skin disorder. Hossa isn't expected to play again, but he's signed through the 2020-21 season.

Bowman didn't mention players he might pursue, but he did specify a scenario.

Another team might have a young player who surprises with terrific training camp, earns a roster spot and makes an impact. As a result, that team might want to unload a veteran.

"If you want to get in the game there, you have to be under the cap and have some breathing room to add a player," Bowman said. "I'm not sure if that will materialize. It might, so that's something that's different for this upcoming season."

The Blackhawks missed the playoffs last spring for the first time after qualifying for nine straight seasons and winning three Stanley Cup during that run. Team president John McDonough emphasized on Saturday that missing the post-season again is not acceptable.

Moreover, he expects the Blackhawks to bounce back and cement their place as an elite franchise over the long term.

"What we target every year is the Stanley Cup Final," McDonough said. "We were off the map for a pretty long period of time.

"We want to keep moving forward as an organization."

Bowman projects more output from speedy 22-year-old centre Nick Schmaltz and 20-year-old winger Alex DeBrincat, both of whom the GM said just scratched surface in 2017-18. Schmaltz had 21 goals and 31 assists in his second NHL season. DeBrincat had 28 goals and 52 points as rookie.

Bowman told fans he expects three Swedes who spent parts of the 2017-18 season in Chicago to make bigger contributions. Defencemen Gustav Forsling, 22, and Carl Dahlstrom, 23, should compete for regular jobs. He called out Victor Ejdsell, a 6-foot-5 centre, as "someone to look out for" because of his great scoring touch.

Bowman also predicted 23-year old centre Luke Johnson, who spent the last two seasons at Rockford of the AHL, would play in Chicago at some point.

HE SAID IT: Asked by a 9-year-old boy in a panel session to name his favourite non-hockey game, former defenceman Brian Campbell answered, "I play with Barbies ... with my two girls." Campbell, who assisted on Patrick Kane's overtime goal that won the Stanley Cup in 2010, has 5- and 3-year-old daughters.