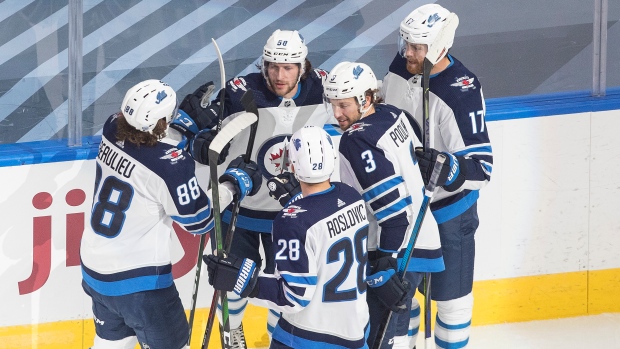 WINNIPEG — Blake Wheeler continued his dominance over Philadelphia as Winnipeg used the power play to break the game open.

Already the Jets career leader versus the Flyers, the team captain scored a power-play goal and added two assists to lead Winnipeg to a 7-3 win Sunday afternoon.

The Jets took advantage of an ugly incident midway through the second period by scoring twice on a five-minute power play.

Philadelphia left winger Joel Farabee crashed into Mathieu Perreault long after the Jets winger no longer had the puck. Perreault stayed down on the ice for quite some time, then had to be helped off and went straight to the dressing room. He did not return and will be further examined Monday, said Jets coach Paul Maurice.

Farabee was issued a major for interference and a game misconduct at 9:03.

The Jets, who were leading 2-1 at the time, then scored two goals during that penalty and a total of four goals in 4:17 to take a 6-1 lead.

Wheeler scored his ninth goal of the season on that power play and Mark Scheifele, who assisted on Wheeler’s marker, then added another 2:41 later.

“That was a big moment in the game and the ref thought it was a five-minute penalty and they scored two goals … It was a big turning point in the game,” said Flyers forward Kevin Hayes.

Scheifele also had a goal and two assists for the Jets (20-11-2) while Nikolaj Ehlers, Luca Sbisa, Logan Shaw, Patrik Laine and Kyle Connor rounded out the offence.

Connor Hellebuyck made 29 saves for the Jets. Brian Elliott, who was replaced at the start of the third period, made 11 saves on 17 shots for Philadelphia. Carter Hart made six stops in relief.

Scheifele’s goal was his team-leading 15th. He extended his point streak to six games, the team’s longest of the season.

“We played hard tonight,” said Flyers coach Alain Vigneault. “We were playing on back-to-back nights, we came to play. We had just made it a 2-1 game and to get a five-minute penalty with a lot of our penalty killers not being in our lineup tonight. So that it made it challenging against a power play that’s got some big weapons.”

It was the third of a three-game road trip for the Flyers, who had dropped a 4-1 decision to the Minnesota Wild in St. Paul on Saturday night. They finished the trip 0-3.

“They played last night at six and then four o’clock today. That’s tough,” Wheeler said. “You know that you’ve got to jump on them. The more you allow them to hang in the game, the more they are going to get their legs under them. But playing two NHL games in under 24 hours is damn hard. We knew that coming in and it was important for us to have a good first.”

“It was a quick trip,” he said. “We got in last night at midnight and played today at four. You want to win every game but unfortunately, we’ve got a bit of an injury bug right now, but the only thing that matters at the end of the day is wins.”

After the major was over, the Jets scored two even-strength goals 16 seconds apart.

Van Riemsdyk scored with 28 seconds left in the middle period to make the score 6-2 heading into the third. Niskanen had scored a power-play marker earlier in the middle frame.

Connor, who scored his 14th of the season on a third-period power play, also extending his scoring streak to six games, keeping pace with Scheifele.

Gostisbehere scored midway through the third.

Ehlers, with his 14th, and Sbisa also scored his second of the season on a blast from the point.

The Jets host the Carolina Hurricanes in the second of a three-game homestand on Tuesday.

This report by The Canadian Press was first published Dec. 15, 2019.