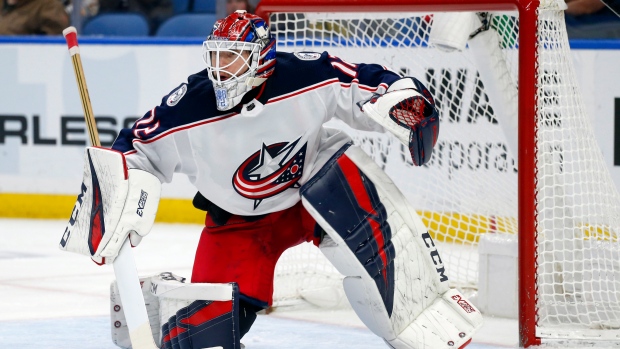 BUFFALO, N.Y. — Don't look now, but goalie Sergei Bobrovsky and the Columbus Blue Jackets are mounting yet another late-season surge to make the playoffs.

Bobrovsky stopped 38 shots to earn his third shutout in five games and league-leading ninth of the season, and the Blue Jackets won their fifth straight by beating the free-falling Buffalo Sabres 4-0 on Sunday night.

"Life pretty much forced us to be at our best because if you're not there, you're not going to make the playoffs," said Bobrovsky, who has allowed just four goals on the past 138 shots he has faced over a five-game span.

"I'm not going to lie, it's nice to have it," he added when reminded he moved one shutout ahead of Vegas' Marc-Andre Fleury. "But it's most important (for) the team success."

With 94 points, the Blue Jackets jumped into seventh place in the Eastern Conference standings, a point ahead of Carolina and two up on idle Montreal.

Columbus enters the final week of the season with an opportunity to secure its third consecutive playoff berth in a run similar to how the Blue Jackets closed last year by going 13-2-2.

Nick Foligno capped a three-goal first period and Pierre-Luc Dubois scored his 25th and added two assists. Oliver Bjorkstrand and Josh Anderson each had a goal for a Columbus team that has outscored its opponents by a combined 24-4 over its past five games.

The Sabres appeared lifeless in adding yet another dud to what has been a lengthy second-half collapse, and raised further questions as to whether the players have quit on second-year coach Phil Housley.

A large group of fans in the upper level — within earshot of where Sabres general manager Jason Botterill sits — began chanting "Fire Housley" during a break four minutes into the third period.

"It's frustrating. I understand the fans' frustration. Guys are frustrated," Housley said. "It's always difficult when you don't get the results."

The slump actually began in late November after the Sabres briefly took over first place in the overall standings following a 10-game win streak. Buffalo has since gone 14-32-8 in a slide that has tumbled them into 27th overall.

"They have a right to be mad," forward Kyle Okposo said of the fans. "Last night we were lifeless. Today it was a little bit better, but it was 4-0. It's not good enough."

Buffalo was shut out for the seventh time this season and fifth time in 12 outings.

Linus Ullmark made 32 saves in dropping to 0-6-1 in his past seven — a stretch during which he has allowed 25 goals.

Columbus, playing a night after a 5-2 win at Nashville, was being outshot 7-1 through the first 6:20, before closing the period by scoring three times on its next 12 shots.

Dubois opened the scoring 7:14 in, when Seth Jones' shot from the right circle banked in off him and into the open left side.

Bjorkstrand scored 6 1/2 minutes later by one-timing in Dubois' pass into the high slot.

Foligno capped the run by drawing Ullmark away from the right post before circling behind the net and wrapping the puck in off the stick of Buffalo defenceman Brandon Montour with 2:13 left.

Foligno laughed off a question as to whether the Blue Jackets' three-goal surge demoralized the Sabres.

"Oh yeah. Not to be rude, it's not my worry," Foligno said. "I'm not concerned about them. I just like the way we were playing. Our goal is to get into the playoffs."

Bobrovsky wasn't really tested until the third period, with his best stops coming eight minutes in. First, he got his blocker up to turn aside Montour's shot from the right point, and Bobrovsky recovered in time to kick out his right pad in stopping Jeff Skinner attempting to convert the rebound in front.

NOTES: Blue Jackets improved their road record to 23-14-2 and matched the single-season franchise mark for road wins set in 2014-15, when they went 23-15-3. ... Sabres D Jake McCabe returned after missing 13 games with a shoulder injury. ... Blue Jackets have 246 goals, one short of matching franchise single-season record set in 2016-17.