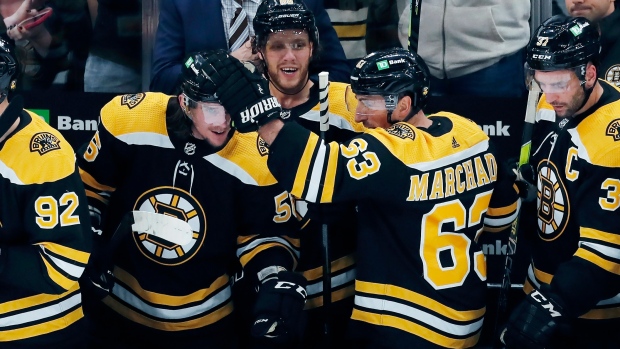 Boston Bruins forward Brad Marchand will have a hearing for a slew foot to Vancouver Canucks defenceman Oliver Ekman-Larsson, the NHL's Department of Player Safety announced on Monday.

Boston’s Brad Marchand will have a hearing today for Slew-footing Vancouver’s Oliver Ekman-Larsson.

The hearing is set for later Monday.

The incident in question occurred during the opening minutes of the first period of the Bruins' 3-2 win on Sunday.  There was no penalty on the play. Marchand had a goal and an assist in the victory.

Should he be suspended, it would be the seventh time the 33-year-old Marchand received a ban from the league. He's also been fined on eight occasions.

In his 13th season in the NHL, the Halifax native has nine goals and 15 assists through 18 games.