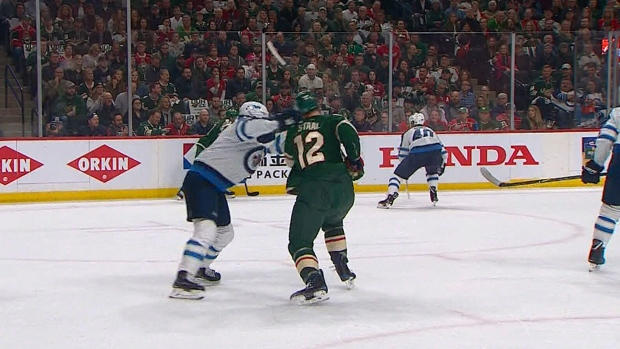 Winnipeg Jets defenceman Josh Morrissey will have a hearing from the league's department of player safety on Wednesday for his cross-check to the head of Minnesota Wild forward Eric Staal in Game 4.

The incident occurred in the first period of Tuesday night's game with the Wild already on a power play in the first period. Staal was without the puck in front of the Jets net when Morrissey delivered the high cross-check which knocked Staal to the ice.

Boudreau said Wednesday a hearing for Morrissey is warranted, calling the action a "vicious cross-check."

Morrissey was not penalized on the play and Wild head coach Bruce Boudreau said after Game 4 that he believes that non-call was the difference in his team's 2-0 loss.

"They decided not to call it because we were already on the power play," Boudreau said. "It cost us the game."

Staal told TSN Hockey Insider Darren Dreger after the game that an official did apologize to him for not making the call, but that was little consolation to him.

"I'm the tallest guy on the ice. He cross-checked me in the neck," Staal said. "There's not much more you can say. Everyone saw it. I don't know how no one with stripes saw it."

As for Morrissey, the Jets defenceman said the act was simply accidental.

"He's a big guy, and my stick ended up getting up a little bit on him," Morrissey said. "I would never try to do that to anybody. I'm not a dirty player."

In total, just three penalties were called in Game 4 as the Jets took a 3-1 stranglehold on the series.

Morrissey, who took 47 minutes in penalties during the regular season, has never been suspended in his two-year NHL career. Already without Tyler Myers due to injury, losing Morrissey could deeply impact the Jets in Game 5. Morrissey logged 22:19 of ice time on Tuesday night.