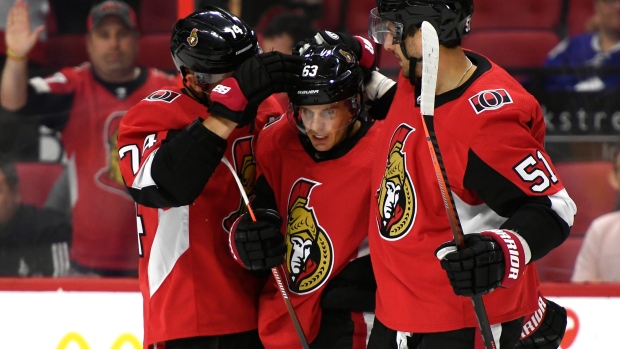 OTTAWA — It's only two games and it's still the pre-season, but the Ottawa Senators feel pretty good after beating the Toronto Maple Leafs ON back-to-back nights.

Brady Tkachuk's empty-net goal wound up the winner as the Senators held on for a 4-3 win over the Leafs on Wednesday in pre-season action. Ottawa took home a 3-1 victory Tuesday night in St. John's, N.L.

"It's a good feeling for sure," said Senators defenceman Mark Borowiecki, who chipped in with two assists. "It doesn't matter what the stakes are, we hate losing. We're all competitors in here."

Craig Anderson allowed one goal on 21 shots through two periods before Filip Gustavsson took over in the third giving up two goals on 18 shots.

Auston Matthews, making his pre-season debut, scored twice for the Leafs. Nick Shore also scored while Michael Hutchinson gave up three goals on 20 shots through two periods, before Brandon Halberson took over in the third and faced six shots.

After a week of training camp and watching the team in action Tuesday night, Matthews was excited to get back to work.

"Obviously it feels good to get back into a game," said Matthews. "It's our first game so you're not really sure what to expect, just trying to get back into it, get your timing back and get adjusted with your linemates."

Any win against the Leafs is cause for celebration by the Senators, but for new head coach D.J. Smith it's more about the experience gained playing against some of the league's top players.

"To play two of the top lines in the National Hockey League, Tavares's line (Tuesday) and then Matthews, if you're a young defenceman and you're out there playing against them you're not going to get that experience anywhere else," said Smith. "You're not going to experience guys who can hold on to the puck that are big, that are strong, so these exhibition games are great."

Both teams have players looking to make good first impressions including the Senators trio of Tkachuk, Brown and Colin White, who played well together for the first time.

"I thought we had some good shifts and some bad shifts," said Brown. "We made some nice offensive plays and a couple boneheaded ones, but that's what pre-season is all about. We're still getting better and better playing with each other, but it's coming."

Matthews made it a one-goal game at the seven-minute mark of the third as he batted a puck out of mid-air and past Gustavsson.

The Senators appeared to ice the game when Tkachuk put the puck into Toronto's empty net, but once again the Leafs were able to make it a one-goal game as Shore beat Gustavsson with 44 seconds remaining in regulation.

The third period was a good lesson for the Senators about playing a complete 60 minutes.

"It's not always going to be pretty for us, especially against a team like that who has some fire power," said Borowiecki. "They start coming in waves when they turn it on, but we had some outstanding goaltending.

"We found a way to win and those are the lessons that are kind of nice to learn in the pre-season because they prove valuable down the road."

Trailing 2-0, the Leafs cut the lead in half early in the second period on a delayed penalty call as Matthews played give-and-go with Morgan Rielly before beating Anderson.

Ottawa regained its two-goal lead less than two minutes later as Ennis picked up the puck in the slot and rifled a shot past Hutchinson.

The Senators got off to a good start taking a 2-0 first period lead with goals by Veronneau and Borowiecki.

Thomas Chabot was a late scratch for the Senators as he wasn't feeling well after the warm-up and was replaced by Hubert Labrie.