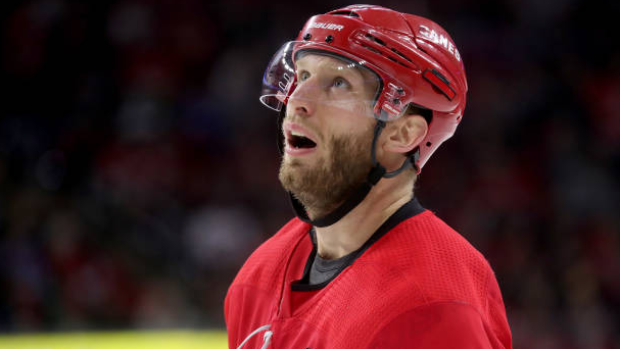 The Carolina Hurricanes enter the final week of the season with just a one-point lead over the Montreal Canadiens for the final Eastern Conference wild-card spot.

The Hurricanes fell 3-1 to the Pittsburgh Penguins on Sunday and were jumped in the wild-card race by the Columbus Blue Jackets, who picked up their fifth straight victory.

"We're not getting help," Hurricanes head coach Rod Brind'Amour said prior to Sunday's loss. "We're going to have to win our games, that's just it. Take care of our business and don't rely on anybody else."

“We’ve got to win our next three,” he added post-game.

Brind'Amour said a poor start cost the Hurricanes on Sunday, but he credited the team for continuing to battle after falling behind 3-0 early in the third period. The Hurricanes outshot the Penguins 38-28 on Sunday as they lost for the third time in four games.

The Hurricanes have three games remaining in their season and begin their final stretch on Tuesday on the road against the Toronto Maple Leafs.

"We've got to flush it… and come back Tuesday ready to play," defenceman Jaccob Slavin said. "Only a couple games left. Nothing to save it for. We've got to get to the playoffs."

It appears Carolina may have to make their final push without defenceman Calvin de Haan after he left Sunday's game with an upper-body injury.

"I haven't talked to the trainers yet, but I think he's going home, so it's not good," Brind'Amour said after the game.