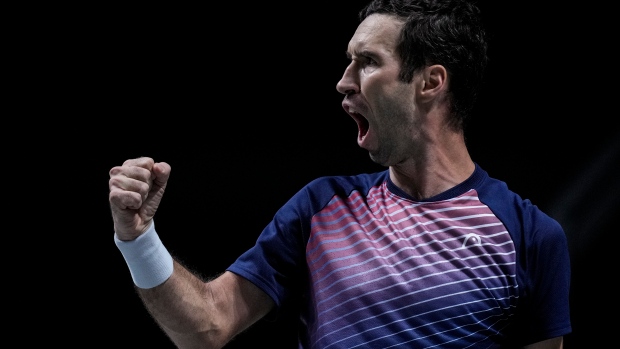 U.S. captain Mardy Fish hinted at a lack of passion within his team after the record 32-time champion Americans were eliminated from the Davis Cup Finals by following up a lopsided loss to host Italy with a humbling defeat to Colombia on Sunday.

The Americans left Turin 0-2 when Reilly Opelka and Jack Sock retired from the decisive doubles match while trailing 3-0 in the opening set against the accomplished Colombian pair of Juan-Sebastian Cabal and Robert Farah.

“You can see the passion for Davis Cup, playing for their country,” Fish said of Colombia. “It’s infectious for them ... These guys are giving fist pumps every other point. It’s impressive, and it’s something that I hope, as a captain, to strive for and get our players to do."

Meanwhile, Russia with second-ranked Daniil Medvedev beat Spain 2-1 in a result that eliminated the defending champion and allowed Serbia with top-ranked Novak Djokovic to advance as the second-best runner-up.

Russia, which is being called RTF (Russian Tennis Federation) for the event amid an ongoing doping suspension in international sport, will face Sweden, the best runner-up, in the quarterfinals.

The other quarterfinals are: Italy vs. Croatia; Britain vs. Germany; and Serbia vs. Kazakhstan.

Played in three cities, each matchup on indoor hard courts is a best-of-three series featuring two singles and one doubles match. The six group winners plus the two second-place teams with the best records based on sets and games advanced to the quarterfinals.

The semifinals and final will be played in Madrid.

After Opelka and Isner were swept aside by rising Italians Lorenzo Sonego and Jannik Sinner on Friday, the U.S. needed an almost perfect performance against Colombia to have any hope of advancing.

Fish moved Frances Tiafoe into the second singles spot ahead of Opelka and Tiafoe responded by rallying past Nicolas Mejia 4-6, 6-3, 7-6 (7) to give the Americans an early lead.

Tiafoe saved two match points in the decisive tiebreaker before finally closing it out on his fifth match point with an ace.

The 38th-ranked Tiafoe was a late pick for the team, replacing Taylor Fritz, and this marked his first Davis Cup victory.

Things went sour for the Americans from there and the U.S. retired from the doubles match due to an upper right leg injury for Sock.

“I thought Frances did an amazing job of (playing with passion) today," Fish said. "It’s not an individual tournament. This isn’t just about how you’re playing on one specific day. It’s about just trying to get through and competing for your teammates and the support staff that’s here.

“There is a lot of people that sacrificed a lot of things to be here this week, including the players,” Fish added. "So we hope to get that right.”

Spain was missing Rafael Nadal, who ended his season early due to injury, and Next Gen ATP Finals champion Carlos Alcaraz, who tested positive for the coronavirus,.

Joe Salisbury and Neal Skupski beat Jiri Vesely and Tomas Machac 6-4, 6-2 in the decisive doubles match to give Britain the 2-1 win.

“Today was tough. You look at the rankings and a lot of people would think it’s going to be straightforward but it’s never like that,” Britain captain Leon Smith said. "The Czech team played really well today, they are a very good young team. Machac looked like he had suddenly turned into a top-20 player overnight.”

Still regaining in form after a series of physical issues, Andy Murray opted not to play for Britain.

Mikhail Kukushkin and Alexander Bublik each won their singles matches to clinch the series victory over the 2019 runner-up.

Canada was without its top-two singles players in No. 11 Felix Auger-Aliassime and No. 14 Denis Shapovalov.

Kazakhstan has now reached the quarterfinals in six of the last 10 editions of the Davis Cup.

Then the top-ranked doubles team of Mate Pavic and Nikola Mektic clinched victory over Hungary by defeating Marozsan and Peter Nagy 7-6 (6), 6-2 in the decisive doubles match after Zsombor Piros had upset former U.S. Open champion Marin Cilic 4-6, 7-5, 6-4 to even it at 1-1.