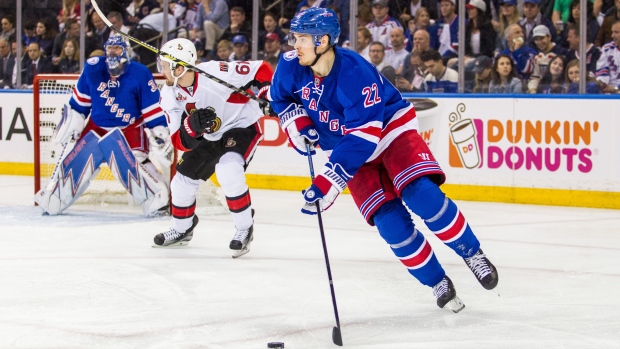 The Boston Bruins have acquired defenceman Nick Holden from the New York Rangers for a 2018 third-round pick and defenceman Rob O'Gara.

In 55 games so far this season, Holden has three goals and nine assists. He is scheduled to become a free agent in July.

The 30-year-old defenceman carries a $1.65-million cap hit for the remainder of the season and TSN Hockey Insider Pierre LeBrun reports no salary was retained in the deal.

Holden scored double-digit goals for the second time in his career last season, notching 11 over 80 games.

In June of 2016, Holden was traded from the Colorado Avalanche to the Rangers for a 2017 fourth-round draft pick. He is in his fifth season after beginning his career with the Columbus Blue Jackets during the 2012-13 season.

O'Gara, 24, has two goals and eight points in 43 games with the AHL's Providence Bruins this season. He also appeared in eight NHL contests with the Bruins, failing to record a point.

The left-handed shot was selected by the Bruins in the fifth round of the 2011 NHL Entry Draft.

The move marks the Rangers first trade since releasing a public letter announcing the team's intentions to make major changes to their roster.

Holden was listed at No. 14 on the latest TSN Trade Bait board. Former teammates Rick Nash (No. 1), Michael Grabner (No. 6), and Ryan McDonagh (No.15) remain on the board.

Guess it’s this time of the year..always tough to see your teammates go and especially one of my good friends Holds..never seen a happier person in my life..only hope the best for you and good luck in Boston #seeyouontheice

The Rangers, who have lost four straight games and eight of their last 10, sit last in the Metropolitan Division with 59 points.