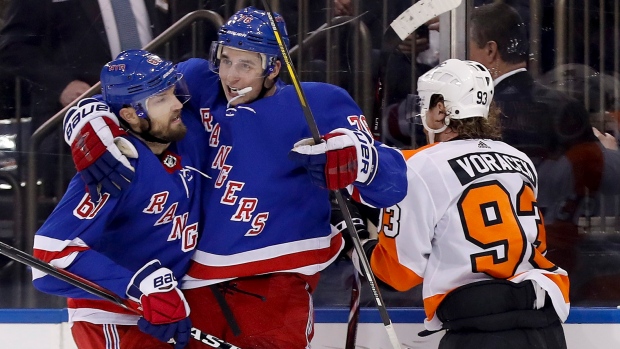 New York Rangers president Glen Sather and general manager Jeff Gorton sent out an open letter to the team's fans on Thursday, indicating changes will be coming to their lineup this season and for their long-term future.

"As we approach the trade deadline later this month and into the summer, we will be focused on adding young, competitive players that combine speed, skill and character," read the statement shared on the team's website and on social media.

"This may mean we lose some familiar faces, guys we all care about and respect. While this is part of the game it's never easy. Our promise to you is that our plans will be guided by our singular commitment: ensuring we're building the foundation for our next Stanley Cup contender."

A Message from Glen Sather and Jeff Gorton. pic.twitter.com/Q56CXS8vDc

TSN Hockey Insider Bob McKenzie reported earlier this week on Insider Trading that the team has already set their asking prices for veteran winger Rick Nash and Michael Grabner and are listening to offers on some of their other players.

"Quite frankly, the word rebuild is finally being used with the Rangers," he said. "General manager Jeff Gorton is going to be listening on everybody. There are no untouchables on the Rangers. Not Ryan McDonagh, not Mats Zuccarello, not J.T. Miller, not anybody. That doesn't mean they’re going to rush everyone out the door, but they are going to listen and if young players, prospects and picks are coming in, they will consider it."

The Rangers are 25-24-5 and sit three points back of the final wild-card playoff spot in the Eastern Conference. The team finished with 100-plus points in each of the last three seasons and made it to the second round of last year's Stanley Cup Playoffs where they were eliminated by the Ottawa Senators.

Their best playoff showing of late came in 2014, when they made it to the Stanley Cup Final for the first time in 20 years.