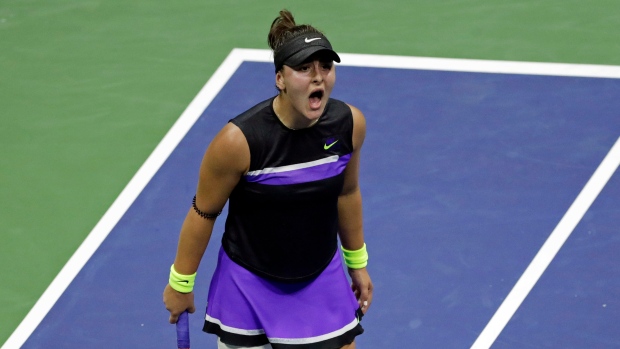 At times during her quarter-final match Wednesday night, Canada’s Bianca Andreescu looked like she was losing steam. But the 19-year-old dug deep for an impressive come-from-behind three-set win over Elise Mertens to advance to the final four at a Grand Slam for the first time in her young career.

Andreescu’s run at the US Open is quickly becoming one of the best Canadian sports stories of the year. Ahead of her semi-final matchup Thursday night with 13th-seeded Belinda Bencic, TSN.ca takes a look at the numbers behind Andreescu’s meteoric rise this season heading into the most important match of her career.

That is the number of days since Andreescu last lost a completed match, falling to Sofia Kenin on March 1 in the semifinals in Acapulco. Her last scored singles loss came in late May when she was credited with a loss during the French Open after retiring prior to her head-to-head against Kenin. The last time she lost on the court was to Anett Kontaveit at the Miami Open in March, but that was because of a shoulder injury that forced Andreescu to retire early (1-6, 0-2).

Somehow, Andreescu has dropped only two sets – yes, two – in five matches at the US Open, meaning three of her five wins have come in straight sets. It’s even more impressive considering Mertens – her opponent from Wednesday night – entered the matchup not having dropped a set all tournament.

This number is a little larger than the first two and it will keep going up the further she advances. With her five wins so far, Andreescu has made a cool $960,000 from her time in Flushing Meadows. The payday significantly boosts her career earnings, which entering Wednesday’s matchup stood at $2.4 million. Should Andreescu go all the way, she would take home $3.85 million and push her career earnings to over $6 million.

Andreescu seems to have a knack for outlasting her opponent. The numbers say so, too, as the Mississauga, Ont., native has won 12 three-set matches in a row. In her 43 victories this season, 17 came in three sets. Of those three-set wins, 10 came after she dropped the first set.

At just 19, Andreescu entered the US Open as the 15th-ranked player in the world. When the new rankings are revealed, Andreescu will vault into the top 10. According to the Associated Press, she should end up no lower than No. 9. One of Elina Svitolina or Serena Williams can pass her, but not both, as those two meet in the semifinal matchup Thursday night prior to Andreescu’s.

While the numbers tell the story of Andreescu’s formidable season, the Canadian still seems to have a hard time wrapping her head around her rise to fame.

“This is honestly so crazy,” Andreescu said Thursday in her televised post-match interview. “A year ago I was in the qualifying round. I was suffering from a back injury. And now, what I’ve accomplished this year, I’m speechless.

“I need someone to pinch me right now. Is this real life?”