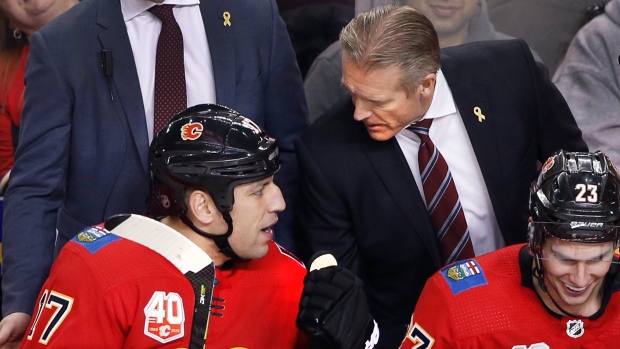 CALGARY — Dillon Dube scored the eventual game-winner and added an assist for his first career multi-point game as the Calgary Flames made it four straight victories on Saturday with a 4-3 win over the Los Angeles Kings.

With the Flames up 3-2 in the third period, Dube scored his third goal in nine games this season, neatly burying a rebound of a Derek Ryan shot.

Milan Lucic, who also had an assist, Zac Rinaldo and Sean Monahan also scored for Calgary (15-12-4). The Flames have points in six-straight (5-0-1) and improve to a perfect 4-0-0 under interim head coach Geoff Ward.

Cam Talbot, making his first start since Nov. 17, overcame a shaky start to record 30 saves and break a four-game losing streak. The win is his first since Oct. 20 and improves his record to 2-5-0 this season. His best stop was a glove save off Roy, looking for his second goal with just over a minute remaining.

Jack Campbell had 26 stops for Los Angeles. His record falls to 4-6-1.

Monahan gave Calgary its first lead of the night at 11:46 of the second. While Monahan's shot was perfectly placed inside the post, all the credit goes to Johnny Gaudreau, who set it up with a beautiful individual rush up ice.

After picking up the puck inside the face-off circle in his own end, Gaudreau immediately sidestepped Michael Amadio, wove around Kopitar and Tyler Toffoli as he raced through the neutral zone, then went around defenceman Sean Walker, before sending a sneaky pass out to Monahan as he skated behind the net.

Down 2-0 late in the first period, getting the comeback started was Lucic on the power play with his second goal of the season, second in as many games and 200th of his career.

The Flames had drawn even 3:01 into the second on a slick move from Rinaldo, who cut across the top of the crease and buried his first of the season.

Rinaldo's night would end early as he was ejected, along with Los Angeles' Kyle Clifford, after they fought during a TV timeout late in the second period. Linesmen were quick to intervene before more than one or two punches were thrown, but both still got fighting majors also.

Precipitating the altercation was an incident behind the Kings' net in which Rinaldo levelled Russian left winger Nikolai Prokhorkin with a hard hit that appeared to catch him high on the chest and shook him up. There was no penalty on the play and Prohorkin returned for the third period and set up Roy's goal at 5:24 that drew the Kings to within one.

The Kings got off to a 2-0 lead on a pair of first-period power-play goals from Kopitar and Doughty, the goals coming six and 13 seconds into their only two man-advantages of the first period.