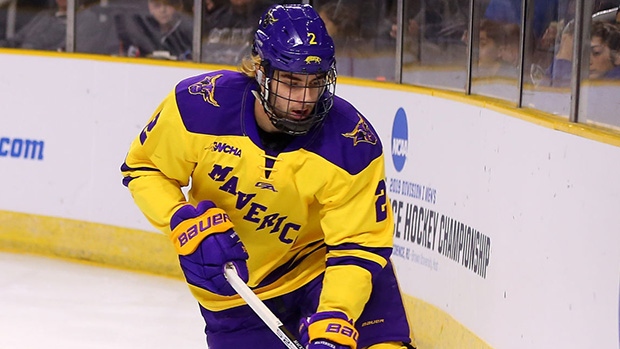 Mackey was No. 1 on TSN Senior Hockey Reporter Frank Seravalli’s list of undrafted NCAA free agents generating interest from NHL teams. The 23-year-old had seven goals and 24 points in 36 games this season. He played three seasons for Minnesota State University-Mankato, totaling 18 goals and 43 assists for 61 points in 118 games.

He named to the WCHA First All-Star team this past season. Mackey was the USHL defenceman of the year in 2017.

Poolman, who spent four seasons at the University of North Dakota, totalled 18 goals, 57 assists and 75 points in 146 NCAA games. He is the younger brother of Winnipeg Jets defenceman Tucker Poolman.

Scouting report on @NHLFlames signings: Poolman is considered a hard defender with high character. Mackey may develop into a top 4 at some point. He’s a mobile Dman who can play against top players. https://t.co/U7O2jvuriU

The 6’7 winger netted double-digit goals in each of his three seasons as a Bronco. His entry-level contract starts in 2020-21.