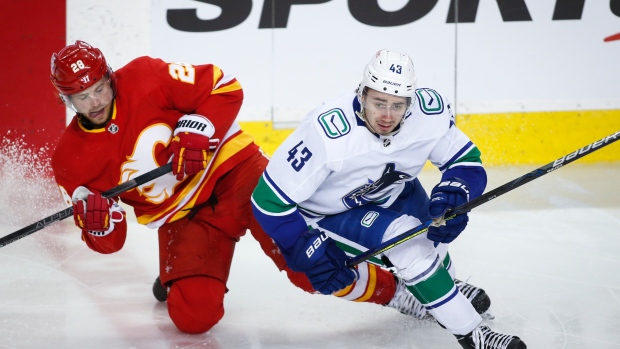 A couple of noteworthy ‘firsts’ as well as a major ‘last’ were on full display Wednesday in Calgary as the Flames and Vancouver Canucks concluded their disappointing 2020-21 seasons.

The game itself, which Calgary won 6-2 thanks to three-point afternoons recorded by Derek Ryan and Brett Ritchie, served little on-ice purpose beyond sentimentality – it was also fan appreciation day so the Flames and a major brewery offered fans watching at home the chance to win a supply of beer for a year. Both teams had already been eliminated from playoff contention.

Wednesday’s regular-season finale at the Saddledome offered up a ‘first’ for two Flames players.

There was the first National Hockey League game for Calgary native Matthew Phillips, who started on a line with fellow rookie Adam Ruzicka and veteran Milan Lucic. Rookie blueliner Connor Mackey, pinching into the offensive zone, notched his first career goal in the third period.

Phillips spoke about the thrill of playing his first NHL game in the rink he frequented as a fan.

“It’s hard to put into words and especially at the Saddledome, that just makes it that much better.”

Phillips had family across the country tuning in, including his grandfather in Newfoundland.

“I gave him a call this morning,” Phillips said. “He’s got to be the happiest guy in the world today. I guarantee you he was watching and that he had everyone he could contact watching too.”

“He’s got a big heart and he tries hard,” he said after the game.

There was also a major ‘last’ for both organizations on Wednesday – the finale was the last game of a season they’re all-to-eager to put in the rearview mirror.

“I give the players credit for the last three or four weeks,” Sutter said. “We had some pretty significant injuries…it certainly wasn’t the way they envisioned their season, but the way they played the last six weeks, if they’d played like that the whole year then they would have been a playoff team.”

The Flames (26-27-3) finished four points back of the Montreal Canadiens for the fourth and final playoff spot in the North Division.

“But I am extremely proud of this group.”

Then there were also ‘potential lasts’ on Wednesday.

Could this have been the last game behind the Canucks bench for Green? His contract expires this summer.

With major roster changes anticipated, have we seen the last of Mark Giordano, Johnny Gaudreau, Milan Lucic and others in Flames jerseys?

While those Flames players will meet virtually with media on Thursday, Green was hesitant to talk about his own future on Wednesday evening.

“I think it's well known how I feel about our group and the team and the city. I don't think there's anything else I want to say at this point, to be honest. We'll see what happens. I still look at our group like we are a team on the rise. I don't have any doubt about that. Yes, things didn't go well this year. We didn't have a good start to the season. I can say I probably would have changed a few things, but it is what it is, and you learn as you go.”

Both the Flames and Canucks face major decisions about their roster and franchise direction. With players, coaches and management meeting with reporters in the coming days, fans in both Calgary and Vancouver could soon have some answers.