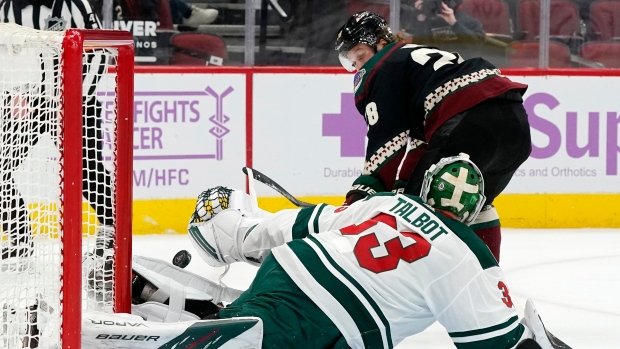 GLENDALE, Ariz. — The Minnesota Wild are in a comfortable position to make the playoffs as the regular season winds toward the finish.

No reason to let up now.

Kevin Fiala had a goal and an assist, Cam Talbot stopped 22 shots and the Wild stretched their winning streak to four games with a 5-2 victory over the Arizona Coyotes on Monday night.

“We want to go into the playoffs going in the right direction,” Minnesota left wing Marcus Foligno said. “That’s our focus right now.”

Kirill Kaprizov, Jordan Greenway and Marcus Johansson also scored to help the Wild strengthen their already-strong playoff position. Minnesota has 59 points, 14 ahead of fourth-place Arizona in the West Division.

The Coyotes had numerous neutral-zone breakdowns and missed an opportunity after pulling within a goal early in the third period. They lost for the sixth time in seven games.

Arizona (45) has a one-point lead over St. Louis for the final playoff spot in the West.

“We worked hard, but they made some nice plays at the right times,” coach Rick Tocchet said. “We get it to 3-2, make a mistake in our own end and it gets put in the net.”

Arizona had an emotional game on Saturday, playing after 9-year-old Leighton Accardo was posthumously inducted into the team's ring of honour.

The Coyotes took a while to regain their focus, falling into a two-goal hole against St. Louis before rallying for a 3-2 win to leapfrog the Blues for fourth in the West.

The Wild, fresh off winning three straight home games, had the early jump on the Coyotes and scored on tic-tac-toe passing to Kaprizov for his 18th goal, matching Marian Gaborik's team rookie record. He also broke Gaborik's rookie record with his 37th point.

Fischer tied it late in the period, beating Talbot to the glove side after picking off a pass by Ryan Suter at the top of the circles for his first regular-season goal since Feb. 19, 2020.

Greenway scored early in the second period, one-timing a pass from Foligno after a breakdown by the Coyotes in the neutral zone.

“It was a great pass to me back door,” Greenway said. “I didn't have to do much.”

Johansson made it 3-1 midway through the period, chipping a rebound between Kuemper's pads on a power play. Carson Soucy appeared to push the lead to three goals a minute later, but it was waved off for goalie interference against Foligno.

Goligoski pulled the Coyotes within one 1:15 into the third period on a shot from the left circle Talbot couldn't see through Fischer's screen.

The Wild wouldn't let them any closer.

Minnesota went back up by two with a screen of its own when Kuemper was unable to see Fiala's shot with two players in front. Jonas Brodin sealed it with an empty-net goal.

“I wish I had a single answer," Fischer said. "For whatever reason, we just can’t find that second or third goal or big play to take over a game.”

The Coyotes signed defenceman Ilya Lyubushkin to a one-year, $1.35 million extension on Monday.

The 27-year-old has developed into a physical defensive presence since signing as a free agent out of the top Russian league in 2018. Lyubuskin scored his first NHL goal on April 7 against the Los Angeles Kings and leads the Coyotes with 77 hits.

Greenway’s goal was his first in 22 games. … The Coyotes had a season-high 45 hits. ... Wild C Nick Bjugstad missed his sixth straight game with an upper-body injury, but did skate with the team on Monday. ... Tocchet said C Tyler Pitlick could be out for a while after sustaining a lower-body injury in Saturday's game against St. Louis

The Wild are 6-1 against the Coyotes heading into Wednesday's season series finale.