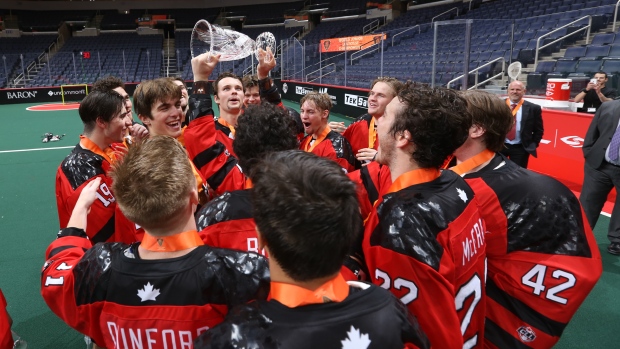 Canada East left no doubt that they were the deserving champions, closing out Game 3 of the IIJL World Junior Lacrosse Championship with a 14-6 win over Canada West to clinch the gold medal at the Canada Life Centre in Winnipeg on Saturday.

The result made the final tally in the three-game, total-goal series 39-24 in Canada East's favour, coming after 15-9 and 10-9 wins in the first two games, played Thursday and Friday.

Canada East got off to a fast start in Game 3, getting a pair of goals from Liam McGrath of Halifax in the first two-and-a-half minutes. McGrath played defence for the Orangeville Northmen in the Ontario Junior Lacrosse League this summer and for Canada when they won WJLC gold in 2018. He moved up to offence and excelled in the role for Canada East this year; he went on to score five goals and three assists to earn player of the game honours Saturday and his total of 13 points tied for the tournament lead with teammate Tanner Buck.

Canada West tightened up defensively, holding Canada East scoreless for the next 16 minutes, and a Nolan Oakey goal closed the lead to one. But then Canada East kicked it into another gear, scoring nine goals before half time to squelch any thoughts that Canada West might be able to overcome the seven-goal deficit they faced entering Game 3.

Scoring slowed down in the second half, with Canada West winning the third quarter 1-0 and the fourth quarter 4-3. Oakey was named Canada West's player of the game after scoring a hat trick. Troy Gutowski was credited with four assists for Canada West, giving him a tournament-leading 10 overall.

*David Anderson won a gold medal with Canada East after having won silver medals with the Iroquois Nationals in both 2018 and 2019. He finished third in tournament scoring with 12 points from three goals and nine assists. That gives him career totals of 17 goals and 26 assists for 43 points in three WJLCs.

*Canada West goalie Justin Geddie played for Israel at the 2019 WJLC. He was a second-round draft pick of the Calgary Roughnecks in last year's National Lacrosse League entry draft. Geddie was one of six players in the 2021 WJLC who have already been drafted by NLL teams. Seven other players are eligible to be selected this year when the NLL holds its draft on August 28 in Buffalo.

*The 2022 WJLC will return to Winnipeg. The three tournaments after that have been announced to be hosted by the USA, a European nation, and Haudenosaunee, Dehontsigwaehs.

*The 2020 IIJL World Junior Lacrosse Championship was originally slated to have nine nations competing, but COVID-19 challenges and protocols posed insurmountable obstacles for others to attend, so the tournament pivoted to the Canada East vs West format.