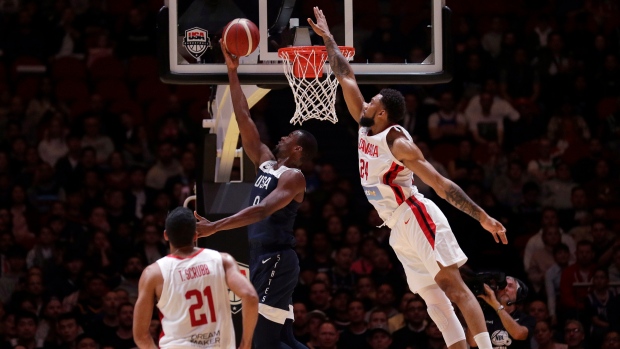 Kyle Wiltjer had 21 points, while Orlando Magic forward Khem Birch — Canada's lone NBA player in the game — had 13 points and six rebounds for a Canadian team that was otherwise completely outclassed in its last game on its pre-FIBA World Cup exhibition schedule.

"You don't play great every night," Nurse said. "They'll be fine. We just flush this one away and get back to what we're doing."

The Canadians shot just 35 per cent from the field and 6-for-23 (26 per cent) from three-point range.

Jaylen Brown had 19 points to top the Americans, who outrebounded Canada 55-37.

Andrew Nembhard, who injured his knee last week, and Kaza Kajami-Keane (ankle) both returned for Canada, while Brady Heslip, a late arrival for the Canadians, played his first game in Australia.

But Canada was missing Oshae Brissett, who sat out the game with an injury.

Canada struggled mightily on the offensive end, shooting 27 per cent from the field in the first half to trail 20-9 after one quarter, and 46-31 at halftime.

The Canadians trailed by as many as 20 points in the third quarter and limped into the fourth down 64-47 in front of a crowd of 15,155 at Qudos Bank Arena.

The Americans stretched their lead to 24 points in the fourth. Canada finished the game with a 7-0 run — including three-pointers from Aaron Best and Wiltjer — to make the score a bit more respectable.

"We have to speed up that learning curve," Brown said of the Americans, who were coming off a surprising 98-94 loss to host Australia on Saturday. "We have a lot of room for growth. It's going to be good when it comes together, the sky is the limit for this group."

Canada finished 4-3 in pre-World Cup action, splitting a pair of games with Australia and Nigeria, and beating New Zealand twice.

"We've got a lot of work to do, but we've enjoyed our time here," Wiltjer said. "Let's not forget these are practice games."

Both Canada and the U.S. are missing most of their NBA stars, although the U.S. is the only team that heads to the World Cup with a full roster of NBA players.

Canada is without Andrew Wiggins, Jamal Murray, R.J. Barrett, Tristan Thompson, Dwight Powell, Shai Gilgeous-Alexander, Chris Boucher and Nickeil Alexander-Walker, among others. Miami Heat forward Kelly Olynyk suffered a bone bruise in his knee in the first exhibition game against Nigeria and will skip the World Cup. Sacramento Kings guard Cory Joseph didn't travel to Australia but is expected to join the Canadian team in China.

The Canadians open the World Cup on Sunday against the Australian Boomers, a team they beat by 20 points during this exhibition run, in Dongguan. Their tough Group H also includes Lithuania and Senegal.

Nurse is getting the full tour of the other side of the world this year. The Canadians have been in Australia for a week or so, and now head to China for the World Cup. Then, Nurse will be in Japan when the world champion Raptors play pre-season games against Houston on Oct. 8 and Oct. 10.