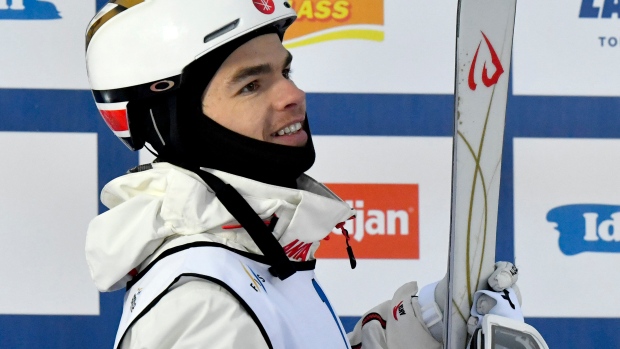 ALPE D'HUEZ, France — Canadian freestyle ski star Mikael Kingsbury was back on top of the World Cup podium on Saturday.

Kingsbury won the dual moguls event -- career-World Cup victory No. 68 for the 29-year-old from Deux-Montagnes, Que.

It was his third dual moguls victory this season, and 97th World Cup podium finish.

The 2018 Pyeongchang Olympic champion dominated the qualifiers, then defeated Sweden's Walter Walberg in the final run.

"I love the duals and it was a great day, especially with the nice weather," Kingsbury said. "I was happy with my skiing (Friday), and I knew my speed was good. I knew I had a good chance in the duals and it feels good to end the weekend on a high note."

Kingsbury was coming off a third-place finish in the moguls a day earlier, a minor mistake costing him top spot on the podium.

In the battle for bronze, Ikuma Horishima of Japan edged Cole McDonald of the U.S. Horishima tops the overall World Cup standings, with a slim eight-point lead over Kingsbury.

"Ikuma and I have a great relationship and our rivalry drives us to push the limits of our sport," Kingsbury said. "Obviously, I'm really happy to win a gold medal right before Christmas. Now I can go home to rest and get ready for the next part of the season."

The next moguls World Cup is January 7-8 in Mont-Tremblant, Que., then Kingsbury will turn his attention to the Beijing Olympics.

Gabriel Dufresne of Repentigny, Que., was 10th on Saturday, while Elliot Vaillancourt of Drummondville, Que., was 15th.

Justine Dufour-Lapointe was the top Canadian on the women's side, finishing sixth. Maia Schwinghammer of Saskatoon was eighth.