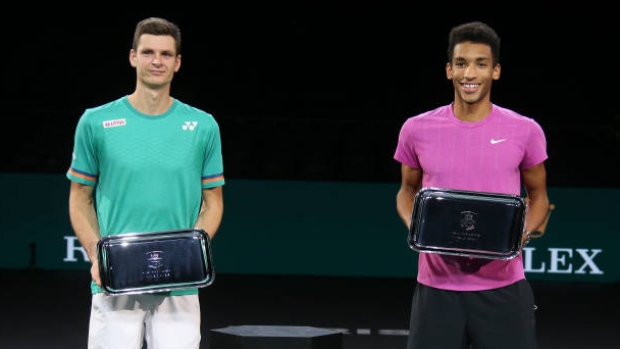 "Honestly this is all unexpected," Auger-Aliassime said in an on-court interview.

The unseeded pair defeated four seeded teams en route to the title. It was their second appearance as a team after a quarterfinal showing at the ABN AMRO World Tennis Tournament last February.

The final took one hour 52 minutes to complete. It was the fourth straight time that Auger-Aliassime and Hurkacz won via match tiebreaker.

"Hubert is a really nice person," Auger-Aliassime said on court. "He has a really good heart. He gives everything out there, he has fun and he's always smiling. So it's a joy."

Auger-Aliassime, a 20-year-old from Montreal, is ranked 21st in singles and 251st in doubles. He is 0-6 in career singles final appearances on the ATP Tour.

Hurkacz, 23, is ranked 33rd in singles and 180th in doubles. It was also his first career doubles title.

"Felix played unbelievable,” Hurkacz said on court. “Bruno and Mate are great doubles players and they played unreal. We had no chances throughout the sets.

"We kept ourselves in the tiebreaks and we are so happy to win.”

This report by The Canadian Press was first published Nov. 8, 2020.