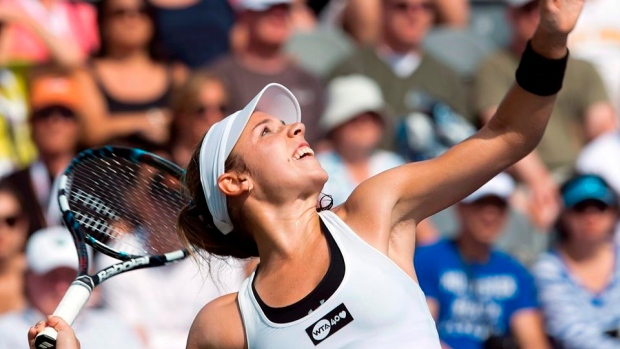 Down 4-5 in the second set, Olmos and Fichman saved two match points before breaking Mladenovic's serve and taking the next two games to force a match tiebreak.

"There are no words to explain what it means to me," Fichman said. "I’m so grateful and I’m so proud of myself and my partner and my fiancé. He’s been with us all week. I’m so proud of us as a team. Then the crowd support, it’s so nice to be able to play in front of fans. We haven’t been able to get it very often. They were just awesome.

"They gave us that lift we needed and pumped us up when we didn’t really feel like getting pumped up. I’m so happy to be able to win this tournament and to do it in front of such a wonderful crowd.”

Fichman and Olmos, who started playing together this season, entered the field as alternates after Ash Barty and Jennifer Brady withdrew from the doubles draw.

They beat top-seeded Hsieh Su-wei and Elise Mertens in the second round and fourth-seeded Shuko Aoyama and Ena Shibahara in a weather-delayed semifinal earlier Sunday.

It was Fichman's fourth career doubles title and her first WTA 1000 crown. Her last tournament victory came in 2020 when she won the Monterrey doubles title with Kateryna Bondarenko of Ukraine.

Fichman, a 30-year-old right-hander from Toronto, started the week in the No. 50 position on the WTA Tour's women's doubles rankings list.

This report by The Canadian Press was first published May 16, 2021.