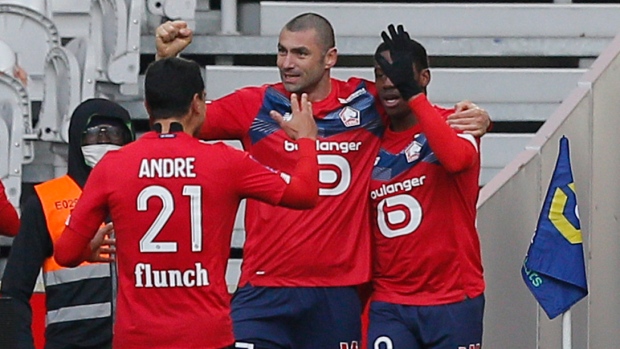 PARIS — Resurgent Lyon won 3-1 at Metz on Sunday to make it 10 games unbeaten and keep the pressure firmly on French league leader Paris Saint-Germain ahead of their meeting next weekend.

Lyon forwards Memphis Depay and Karl Toko Ekambi are in great form for last season's Champions League semifinalist. Depay scored the first goal against Metz in the 16th minute after being set up by Toko Ekambi, who then netted twice early in the second half for Rudi Garcia's side.

After Farid Boulaya pulled a goal back for Metz, Toko Ekambi hit the crossbar 10 minutes from time for Lyon, which trails second-place Lille on goal difference.

Both sides had a player sent off in the closing stages.

Earlier, Lille coach Christophe Galtier's concerns about a Sunday lunchtime game so soon after playing in Europe proved unfounded as his side beat Monaco 2-1.

Galthier is emerging as a strong early candidate for the season's best coach. Lille has lost only once in 13 league games, while it has advanced from its Europa League group so far unbeaten and in some style. Lille beat and drew with Italian league leader AC Milan and has netted 12 goals — one more than Zlatan Ibrahimovic's Milan. But Galtier was worried that Thursday night's win against Sparta Prague would leave his key players too tired against Monaco.

After a goalless first half on Sunday, 20-year-old Canada striker Jonathan David scored with a neat finish from Jonathan Ikone's clever pass.

Midway through the second half, veteran Turkey striker Burak Yilmaz then set up countryman Yusuf Yazici as they broke from the halfway line.

They played together at Trabzonspor — where it was Yazici usually setting up Yilmaz — and their partnership in northern France is blossoming.

Yilmaz scored both against Sparta and Yazici has been scoring freely, having notched back-to-back hat tricks in Lille's European campaign. The flamboyant attacking midfielder has 10 goals in 14 games overall this season.

PSG won 3-1 at Montpellier on Saturday, with star striker Kylian Mbappe grabbing his 100th goal since joining the club from Monaco three years ago.