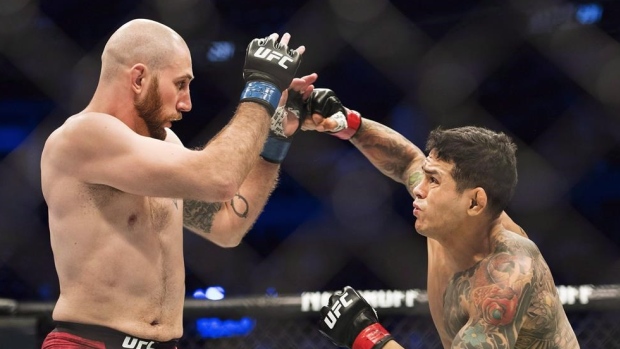 Canadian Kyle (The Monster) Nelson is off this weekend's UFC card in Las Vegas due to visa issues.

Nelson (13-3-0) was slated to face Sean (The Sniper) Woodson at a catchweight of 150 pounds at Saturday's UFC Fight Night show at the UFC's Apex production facility.

A UFC spokeswoman said Tuesday that the 29-year-old native of Huntsville, Ont., did not receive his visa in time to make the trip. The UFC has put together cards on short notice recently as it looks to gets its schedule back on track despite the global pandemic.

"I didn't know I was going to get a fight any time soon," Nelson said in an interview last week. "I was staying in shape and everything, but there wasn't really any idea that I would have a fight soon.

"And they called and said 'Hey, would you like to fight Sean Woodson in two and a bit weeks?' And we jumped on the opportunity."

The main event Saturday features Dustin (The Diamond) Poirier, ranked third among lightweight contenders, against No. 5 Dan (The Hangman) Hooker.

This report by The Canadian Press was first published June 22, 2020.