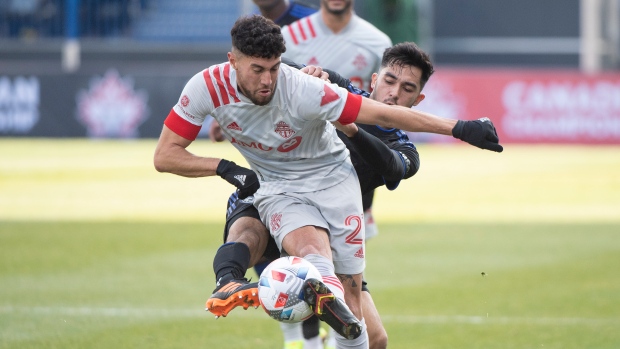 But Canada's rise up the international rankings may also help both players achieve their dream to play abroad.

With six matches remaining, Canada (4-0-4) tops the final round of CONCACAF World Cup qualifying standings. The Canadian men are drawing attention — now 40th in the FIFA rankings, having started the year in 72nd place.

With British rules changing after Brexit, Canada's improved ranking will likely facilitate work permits for players looking to find a club there.

Laryea, whose career was revived by a move to Toronto from Orlando City, seemed unsure when asked about his future at TFC's end-of-season session Wednesday.

"I don't really know right now," he said. "So I'll see what happens in the next couple of weeks. Obviously I've said it's a dream of mine to play in Europe and I stand by that. But I also love playing for this club and this is my hometown. They gave me a second chance at MLS and all that.

"I guess I'll say I'm open to a lot of different things," he added.

Laryea has spent the last three seasons in Toronto, proving to be a dangerous fullback/wingback able to torment defenders. A fierce competitor, he has also made his mark wearing the Maple Leaf with 22 caps.

Osorio, an influential midfielder who has won 49 caps for Canada, is also up for an overseas challenge.

"I've said it for years. If the right situation came, I always dreamed of as a kid to go to Europe and to go abroad and to test myself,' he said. "That hasn't changed."

"I can't really say what's in the future. As long as I'm here in Toronto, the club knows I'll give my 100 per cent here," he said. "But I have expressed the desire to challenge myself, especially with everything happening with the national team and how difficult it is now to get into that team."

Osorio says he also knows soccer at this level is a business.

"The right situation has to happen for both sides. I just hope whenever that happens that what I want is taken into account."

"Just going to Europe doesn't mean it's a better level of soccer than MLS. There's lots of European leagues … We have a number of European players that come here to MLS that want to test out our league."

"I just think it's natural that players think about what chances lie out there," he added. "Our job is to put the best team together. And Richie and Jonathan are both key guys that we want to stay here. Richie's under contract, Jonathan has an option. We see them as anchors. And we're going to do what it takes to keep them here on this team and this roster going forward."

Manning said while his club "always will discuss players' aspiration," he believes TFC's prospects for the future will keep them in the fold,

Osorio acknowledged that Canada's success has taken the edge off a tough club season.

"It helped for sure, as it should," he added.

Another plus is the fact that a lot of the national team grew up together.

"A lot of the guys on the (Canadian) team are my best friends from childhood," said Laryea, who made US$226,950 this season.

Toronto's dismal 6-18-10 season clearly took a toll. Asked what went wrong this season with TFC, Laryea said: "I don't know where to start."

He said going away on international duty gave him a chance "to break away from everything that was happening here to go somewhere where it was good.

"And other people didn't. I was saying the other day I don't know what I would have done or how I would be mentally if I didn't have (the) national team and, obviously, my family as well."

This report by The Canadian Press was first published Nov. 24, 2022