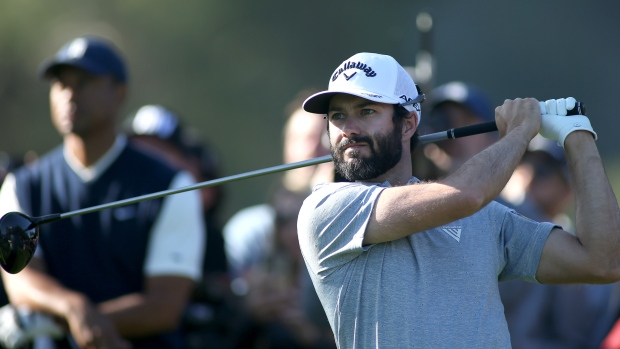 For the first time in his career, Adam Hadwin got to tee it up with Tiger Woods and the experience was memorable.

Hadwin was paired with Woods for the third round of the Genesis Invitational, with Jordan Spieth as the third member of the group.

“I enjoyed it,” Hadwin reflected. “He has always been someone I looked up to in the golf world so to finally get the chance to play alongside him was great.”

The group was followed by a large gallery that was boisterous but generally polite. As is usually the case with Woods, however, those watching the 15-time major winner sometimes broke etiquette by moving when he finished playing and not showing as much concern for Spieth or Hadwin.

The Canadian ended up with the low score of the three players, posting a two-under 69 at Riviera Country Club. Woods struggled to a five-over 76 with his putter inflicting most of the damage. He missed eight putts from less than 10 feet, adding a four-putt on the par-4 13th that led to a double-bogey.

Hadwin’s round was a case of one step forward, one step back over the first nine holes, making three birdies but following those with three bogies.

His second nine saw him birdie three of the first five holes before dropping a bogey on the seventh. He sits in a tie for 36th spot heading into Sunday’s final round.

Hadwin tees off at 9:00 AM PT with Adam Schenk and Ryan Moore.