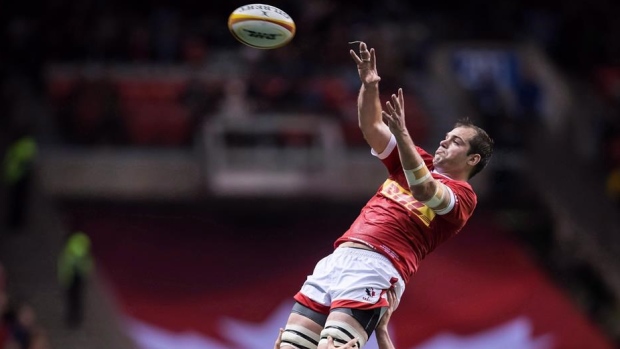 Canada, normally a fixture at the Rugby World Cup, is down to its final chance at qualifying for the sport's showcase.

The Canadian men, ranked 23rd in the world, face No. 28 Kenya on Sunday in Marseille, France, in the four-team Rugby World Cup repechage tournament. Also bidding for the 20th and last berth in the 2019 Rugby World Cup are No. 21 Hong Kong and No. 29 Germany, who also meet Sunday.

The round-robin winner will slot into Group B in Japan alongside top-ranked New Zealand, No. 5 Australia, No. 14 Italy and No. 22 Namibia.

The repechage marks the end to a World Cup qualifying process that started in March 2016 when St. Vincent & the Grenadines hosted Jamaica. That was the first of 182 matches involving 71 nations.

"This competition is about experience. It's Cup rugby," said Canada coach Kingsley Jones.

"We need to be able to stand up under pressure and there will be pressure," he added.

Canada has qualified for all eight previous Rugby World Cups, all at the first qualifying attempt. But the road has proved far more difficult this time with the Canadian men struggling to show they still belong with the big boys.

Canada dropped into the repechage after losing qualifying series against the 15th-ranked U.S. Eagles (80-44 on aggregate) and No. 18 Uruguay (70-60 on aggregate).

The stakes are high for Canada, which relies heavily on funds from World Rugby. Missing out on the World Cup could cost Rugby Canada $10 million by its own estimate.

In failing at the first two qualifying hurdles, Canada has already lost out on $450,000 in World Rugby funding. Rugby Canada turned to its provincial unions to increase registration dues while looking internally to reduce costs in a bid to fund its pre-repechage program.

"Qualifying for the 2019 Rugby World Cup is vital to the future of the sport in Canada and the health and well-being of all Rugby Canada programs," Rugby Canada said at the time.

The optics have not been good recently for Rugby Canada, which only recently settled a labour dispute with its men's sevens team. That sevens boycott meant Jones did not choose any sevens players for his repechage roster.

All three of Canada's rivals will be motivated. Germany, Hong Kong and Kenya are vying to become the 26th country to play at the Rugby World Cup and the first debutante since Russia in 2011 (when Jones was part of the Russia coaching setup).

Jones expects a tough challenge from the Africans on Sunday.

"They're physical. They've got a lot of good players that have played in South Africa," he said. "They'll have a very good scrum, set piece, maul."

Germany has benefitted from the largesse of billionaire Hans-Peter Wild, whose family amassed a fortune with the Capri Sun juice concentrate drink. Wild, who owns France's Stade Francais club, has invested millions in German rugby.

Hong Kong has actively recruited ex-pat players, according to Jones.

"They've got an ad on their website — 'Come to Hong Kong, play professional rugby,'" he said.

Rees calls the Hong Kong entry the "most prepared international squad we have ever produced."

Jones says all three rival teams are used to training and playing together. Canada's challenge is melding its overseas pros, some of whom have a hard time finding regular playing time with their clubs, with the domestic-based amateurs.

Canada faces Germany on Nov. 17 and Hong Kong on Nov. 23. All of the repechage matches will take place at the 5,000-capacity Stade Delort.

The Canadians come into the tournament on three straight wins, having beaten Oxford University and Coventry in warmup matches. Canada 'A' also edged Tonga 'A' in mid-October at the World Rugby Americas Pacific Challenge

World Rugby has had a repechage in one form or another since the 1999 World Cup. But this is the first time it has had a round-robin event in one location.