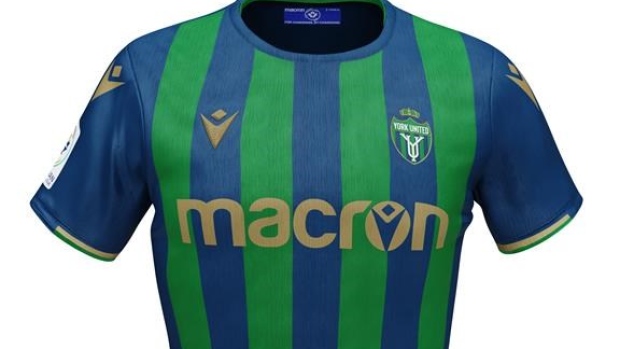 TORONTO — After two seasons in the Canadian Premier League, York 9 FC is rebranding.

The club will be known as York United Football Club with a new crest and jersey to go with the name.

York will continue with the Nine Stripes nickname.

The club also unveiled its new Nine Stripes edition kit — blue and green, with stripes on the front of the jersey. Its new primary jersey, which will still feature white, green and blue, will be released at a later date.

The new brand is an attempt to bring in both city of Toronto and surrounding region.

York says its new crest is inspired by both the Old City of York — the predecessor to Toronto — and the Queen’s York Rangers, a Canadian Army regiment, with a presence both downtown (Fort York) and the York Region (Aurora).

York president and GM Angus McNab said the rebrand came out of a re-examination of the club's mission and values, with fans consulted during the process.

"It all leads a very windy path but it take us to where we are today." McNab said in an interview.

"United is not just a name in this," said McNab. "Unity and bringing people together is what we're about. The Baldassarra family (which owns the team) are builders, they're people who take risks.

"It was time to be bold. Yes, we're only two years in but the most successful companies in the world, the most successful brands in any field are not afraid when things are not the easiest conversations. Sometimes we have to them with ourselves and go for a bold move, a bold direction, which is this rebrand … We want to build this for the long-term future and long-term sustained success. And that's why we felt making the change now was right."

CPL commissioner David Clanachan called the rebrand a "fresh new look that aligns with our goal of always being innovative."

This report by The Canadian Press was first published Dec. 11, 2020