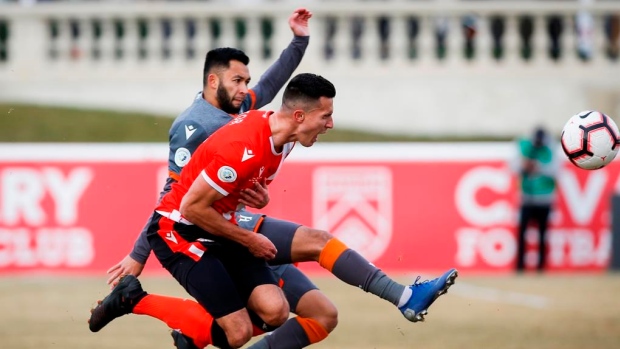 The Canadian Premier League will kick off its season June 26, starting with a month's worth of games all in Winnipeg.

The Manitoba capital will host the first 32 games of the campaign with each of the eight teams playing eight games in a stretch that will run through July 24.

The league is committed to teams playing a full 28 regular-season match season, in a single-table format, saying it hopes to return to home markets after the opening Winnipeg portion of the season.

But there are plenty of questions still to be answered on that score, including will games and/or fans be allowed in all or some of those home markets. The league's goal, understandably, is to return to home markets in front of supporters.

All of the Winnipeg games will be played without fans at IG Field, home to Valour FC and the CFL Blue Bombers.

The full Winnipeg schedule will be released Wednesday, with the rest of the season to follow at a later date.

Clanachan said the league had received offers from 11 locations to host the opening portion of the season, with cities in the U.S., Europe, the Caribbean and five Canadian provinces all interested.

"We wanted to stay here," Clanachan said of Canada. "We thought it was important to do that, for our fans and our supporters. But also just, pardon the pun, (for) a shot in the arm for Canada."

Staying in Canada also allows the league to be more "flexible and nimble in the event that things open quicker," he added.

"I want to be back in our home markets playing in front of fans and supporters as quick as possible. You can finally see that light at the end of the tunnel, I think. It's still far away but I believe we can see that."

Another plus was coming to a city that had a CPL team, meaning a lot of what's needed is already in place.

The CPL is billing the 29-day single-city format as “The Kickoff Presented By Volkswagen."

The CPL had hoped to begin play May 22 on the Victoria Day long weekend, but announced in late April that it was pushing back the start due to the pandemic.

Last year, the league's second season turned into a shortened tournament based out of Charlottetown. The Island Games ran Aug. 13 to Sept. 9 at the University of Prince Edward Island, with Hamilton's Forge defending the title it won in the league's inaugural 2019 season.

The 2020 season was originally slated to run from April 11 to Oct. 4. The 2019 inaugural regular season ran April 27 to Oct. 19, divided into spring and fall campaigns.

York has not yet received permission to train in Ontario while Forge began limited training in groups of 10 on Friday. Atletico Ottawa held its camp in Madrid and, now back home, is under quarantine until June 13.

Teams will be tested for COVID-19 before travelling, during the first seven days and weekly thereafter in Winnipeg.

Players from different teams will only interact with other sides during matches. As in Charlottetown, some 300 players, staff and officials will stay in one hotel.

“The health and safety of all Manitobans is our first priority and public health has been working alongside the Canadian Premier League and the Valour Football Club to bring this event to Winnipeg in a safe manner and within the current public health orders,” Dr. Brent Roussin, Manitoba’s chief provincial public health officer, said in a statement.

The tournament is being supported by a commitment from the Manitoba Chambers of Commerce and Economic Development Winnipeg through a provincial long-term recovery fund. Last November, the Manitoba government provided $50 million to these organizations to help the province’s economic recovery from COVID-19.

The CPL will unveil its teams' new kit on Monday.

This report by The Canadian Press was first published June 5, 2021