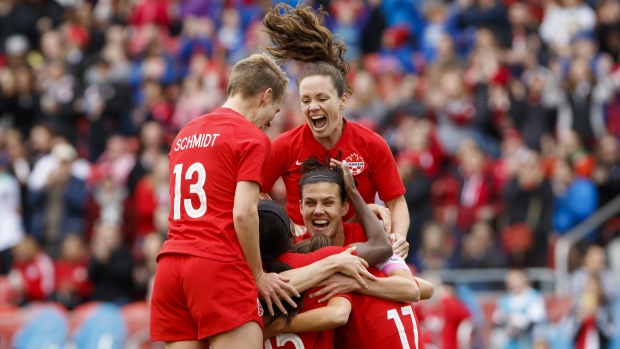 LAVERUNE, France — A relaxed Canadian team trained in the sunny south of France on Saturday, showing no signs of nerves ahead of Monday's Women's World Cup opener against Cameroon.

But peel away the can-can dance moves and pre-practice playlist that included Bad Bunny, DJ Snake, Daddy Yankee and Travis Scott and the fifth-ranked Canadian team is all business.

Asked what she was hearing from back home, on the eve of her fifth World Cup, captain Christine Sinclair said she has shut down her social media.

"I've actually deleted it from my phone. So you guys are it," she told a handful of Canadian reporters after practice at a secluded training ground in a charming town outside of Montpellier.

Coach Kenneth Heiner-Moller says when it comes to emotion, balance is all-important for the team.

"Because they need to be excited," he explained. "This happens every four years so if you're not excited, there's something's wrong. But then also making sure that this is an energy we need to keep hopefully for a long period of time. And not coming into this match like tense, but definitely excited.

"And that's a balance we need to find. We have some players who have (done it) numerous times so they know and they speak to some of the less experienced players once in a while, so I am not doing a lot. The players are doing more than I am."

But the stylish 48-year-old Dane acknowledges that the time for talking is over.

"I think it is. Let's make this happen. We're ready. We haven't been more ready that we are."

Defender Kadeisha Buchanan, who won the Hyundai Young Player Award at the 2015 tournament, echoes that thought.

"We all can't wait. It's been a long lead-in to the World Cup so we're just excited to start playing games," said Buchanan, who at 23 already has 88 caps.

After watching France blank South Korea 4-0 in the tournament opener Friday night, Sinclair said the Canadians "are all ready to do our part."

For Heiner-Moller, it's a return to the tournament as a head coach. Moeller, an assistant under former coach John Herdman, led his native Denmark to the 2007 tournament in China.

He's working through his own emotions this time.

"You know what, I'm relaxed and calm. But I just want to get started ... It's been such a long lead-in. Ever since we qualified against Panama (Canada won 7-0 in the CONCACAF Women's Championship semifinals last October to book its ticket to France), I've been looking forward to this. Hopefully I'm going to enjoy every single step of it.

"So excited? Yes. Nervous? No. I just want it to get going."

Canada lost 2-0 to the top-ranked Americans in the CONCACAF Championship game but has not been beaten since, posting a 5-0-3 record while outscoring its opposition 8-1.

Over that stretch, the Canadian women have conceded just four goals while scoring 33 — although 19 of those came in lopsided wins over Cuba and Panama.

No wonder Heiner-Moller likes his defence.

"That's definitely the all-right," he said. "But we need to put more (goals) in though and we're looking to doing that and we're working on that. I think we're looking sharper than we have in a long time in the last third (of the field)."

Asked if Sinclair, who turns 36 on Wednesday, is up to playing three group games in 10 days, Heiner-Moller talked up his skipper's physical condition.

"She's potentially the fittest you've ever seen her," he said. "So I wouldn't be concerned about that."

At 181 career goals, Sinclair is just three back of retired American Abby Wambach's world record of 184.

Cameroon, ranked No 46, is somewhat of a mystery. Heiner-Moller says the African team has speed up front and skill in the midfield.

"We need to find a way to deal with that," he said. "I think the most important thing for us is making sure that we don't look at the world ranking. If you're an African team, you play maybe two matches per year and that's it. So you can't take anything out of that. But if you look at where they're playing (their club soccer), they're playing in some of the better leagues in the world. So they've got quality players, for sure."

The two teams have never met.

Fullback Allysha Chapman worked out on her own during part of the practice open to the media Saturday. Heiner-Moller downplayed it.

"Coming into the first match, we need everyone to be fully ready. So we need to take care of some of the players. But 23 (players) are ready to start."