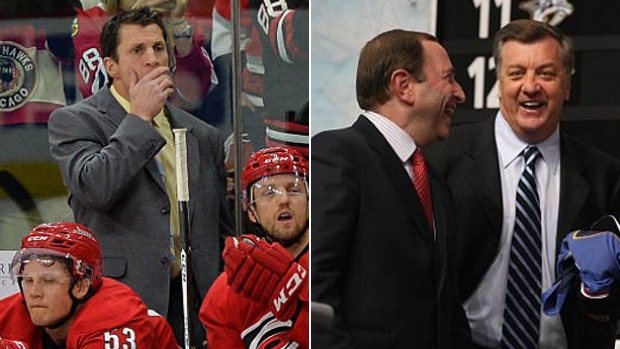 The Carolina Hurricanes have named Rod Brind'Amour as their new head coach, the club announced on Tuesday.

Brind’Amour had been an assistant coach with the team since 2012.

The team also announced that veteran executive Don Waddell will serve as president and general manager of the club.

"Rod is the greatest leader in the history of this franchise, and has earned the opportunity to take charge of our locker room," Waddell said in a team release. "We spoke to a number of candidates for this position, but our conversations with staff and players consistently returned to the same person. Rod's fresh ideas, ability to motivate and understanding of what it takes to bring a championship to Raleigh will help our young team take the next step toward competing to bring the Cup back to North Carolina."

The vacancy behind the bench arose when Bill Peters opted out of the final year of his contract with the Hurricanes last month, taking the head coaching role with the Calgary Flames a few days later.

Brind’Amour, 47, spent 10 seasons with the Hurricanes as a player and won the Selke Trophy twice with the team. He retired from the NHL in 2010 after playing in 1,484 career games with the Hurrcianes, Philadelphia Flyers and St. Louis Blues.

He captained the team to a Stanley Cup in 2006.

A native of Detroit, Waddell was the GM of the Atlanta Thrashers from 1998 to 2010. He was let go when the club became the Winnipeg Jets. He joined the Hurricanes organization in 2014 as the president of the club's parent company, Gale Force Sports and Entertainment.