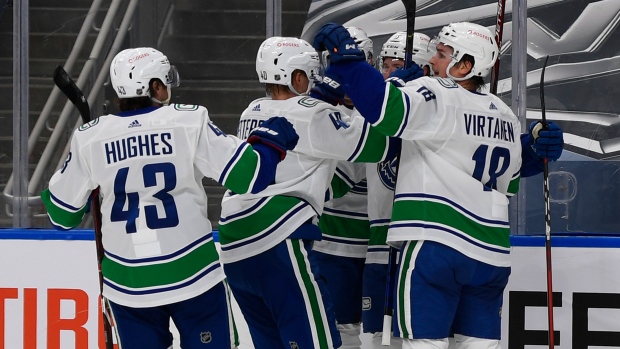 VANCOUVER – It’s a night of familiar faces in different places as the Vancouver Canucks (1-1) visit the Calgary Flames (0-0-1) for the first time this season at Scotiabank Saddledome in Calgary. Former Canucks Jacob Markstrom, Chris Tanev and Josh Leivo all signed with the Flames in the off-season while former Flame Travis Hamonic has made his way to Vancouver.

The Canucks split their season-opening series in Edmonton winning the opener 5-3 on Wednesday night before falling 5-2 on Thursday. Newcomer Nate Schmidt scored his first goal in Canuck colours while Tyler Motte had the other. Thatcher Demko stopped 41 of the 46 Oiler shots he faced, but was no match for Connor McDavid who registered a hat trick and added an assist.

The Canucks have yet to score on seven power play opportunities in the early going this season. The fourth-ranked power play in the league in 2019-20 has generated 11 shots and a number of decent looks, but has not been able to break through. It’s one of the reasons Elias Pettersson has just a single point through his first two games – a third period assist on a Brock Boeser goal in the season-opener.

Quinn Hughes has the team’s early-season point lead with 0+3=3 while Bo Horvat leads the Canucks with 10 shots on goal so far. The team managed just one first period goal in the first two games against the Oilers.

After watching from the bench on Thursday, Braden Holtby is expected to return to the Canuck crease tonight. He stopped 28 shots in his Canuck debut on Wednesday.

The Flames return to action after a 4-3 overtime loss in Winnipeg on Thursday night. Elias Lindholm led Calgary with a goal and an assist while Matthew Tkachuk scored on one of his team-high five shots and Johnny Gaudreau had the other goal. The Flames scored all of their goals in the opening 20 minutes and took a 3-1 lead to the locker room after the first period.

Jacob Markstrom allowed four goals on 34 shots including Patrik Laine’s overtime winner. Chris Tanev had an assist in his 20:22 of ice time. Josh Leivo did not figure in the scoring on right wing on a line with Gaudreau and Sean Monahan.

Per Ben Birnell of the Utica Observer Dispatch, the last time Markstrom faced the Canucks organization was when he was with AHL San Antonio on February 26, 2014. A week later he was traded from Florida to Vancouver.

Tonight is the first of 10 meetings between the Canucks and Flames. The Western Canadian rivals will play again on Monday night in Calgary.