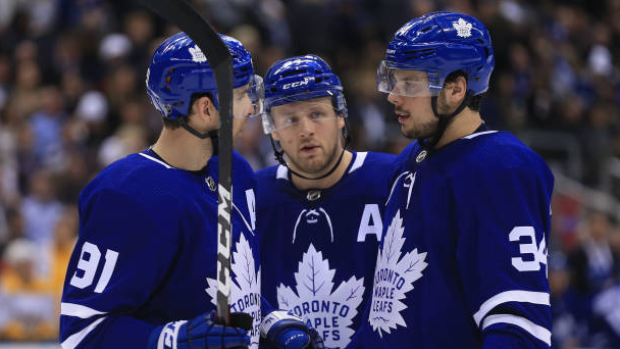 Patrick Kane answered one way and then caught himself.

The Blackhawks winger is part of a leadership group captained by Jonathan Toews in Chicago, but as it stands, seven NHL teams don't currently have a player wearing the 'C' heading into the 2019-20 season.

"I think so, yeah," Kane began, before quickly adding: "Well, it depends."

Or is having a captain an archaic nod to the past?

"It's overrated," Montreal Canadiens forward Max Domi added at the recent NHL/NHLPA media tour in Chicago. "That being said, everyone knows who the leaders are on the team."

Three of those captain-less clubs reside in Canada — the Maple Leafs, Canucks and Senators — although Toronto and Vancouver could name a new locker-room leader any day.

But even if those roles are filled, a number of franchises will once again head into the new campaign without a captain.

"With a lot of teams, it works," said Red Wings centre Dylan Larkin, who is among the candidates should Detroit decide to hand out the 'C' in 2019-20. "We have veteran guys who have played all over the league.

"We take the pressure off each other."

At the other end of the spectrum, Arizona Coyotes centre Derek Stepan is a big believer in having one voice.

"I believe in a captain and two assistants."

No team in the NHL without a captain has won the Stanley Cup since the 1972 Boston Bruins and its roster that included the likes of Bobby Orr and Phil Esposito.

The Vegas Golden Knights got close in their expansion season without a captain in 2018, but stoic leaders like Mark Messier and Steve Yzerman have been hallmarks in the game.

Times, at least in some situations, seem to have changed.

Nashville Predators centre Matt Duchene said teams should only award the 'C' when there's a true candidate, and not just because the role needs to be filled.

"The great ones I've played with, they lead by example every day and set that standard," he said. "But at the same time, you need different types of leadership in the locker room and that's why having a strong leadership group is so important.

"It takes a lot more leaders to pull the thing in the right direction and it takes only a couple of guys to go the wrong way and tear it down."

The Buffalo Sabres named Jack Eichel their captain last season at age 21 ahead of his fourth NHL season. With the likes of Auston Matthews in Toronto and Bo Horvat in Vancouver as potential candidates on their respective teams, Eichel said the added attention was an adjustment.

"Everything you do is a little bit more under the microscope," he said. "Everyone's looking at you for answers when things aren't going well. Just like a lot of guys in the room, last year was a bit of a learning experience.

"You understand, 'This went well, this didn't go well.' You can just try and improve on it."

Domi grew up idolizing Leafs captain Mats Sundin and plays alongside Montreal's Shea Weber, but said the importance of the role isn't what some might think.

"(Weber's) practice habits, his workout habits, the way he handles the media, the fans, how tough he is in games — he does everything," Domi said. "He's the guy driving the ship."

Ottawa defenceman Thomas Chabot, who's name will no doubt be in the conversation if the Senators eventually name a captain, said players are encouraged to speak up regardless of their status in the hierarchy.

Los Angeles Kings captain Anze Kopitar won the Cup in 2012 and 2014 as an assistant before assuming the top job in 2016. He said even with a letter on the front of his jersey, it's always a collaborative effort.

Kane said having Toews — a "no-brainer" choice for the captaincy in Chicago in 2008 at 20 years old — has been a huge asset in both good times and bad.

"It really helps our team to have a guy like that, that you can look to lead discussions, say the right things in the locker room, lead things off the ice," he said. "We have a few guys below him who can help lead that charge.