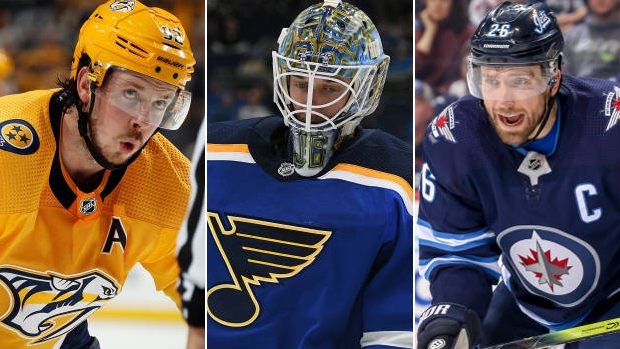 With four days remaining in the regular season, only two of the NHL's eight playoff matchups are set and first place in the Central and Metropolitan divisions are still up for grabs. TSN.ca takes a closer look at what's at stake as the NHL season enters its final days.

The Tampa Bay Lightning clinched the Presidents’ Trophy in mid-March and will have home-ice advantage throughout the playoffs. Which team the Lightning will host in the first round, however, remains to be determined.

If the playoffs started today, the Lightning would host the Columbus Blue Jackets, who own a tiebreaker over the Montreal Canadiens. The Blue Jackets dropped into the second wild-card spot on Tuesday when the Boston Bruins snapped their five-game win streak in a 6-2 rout.

The Canadiens have put together back-to-back wins since falling to the Blue Jackets last Thursday. Montreal must finish the regular season with more points than Columbus to clinch a playoff spot since the Blue Jackets own the non-shootout wins tiebreaker with 44 to the Canadiens’ 41. Both teams are currently one point back of the Carolina Hurricanes, who have 42 regulation/overtime wins this season.

In what would likely be a worst-case scenario for the Lightning, Tampa Bay could still end up hosting the Pittsburgh Penguins, who sit currently third in the Metropolitan with 97 points.

All four of the Lightning’s potential opponents are off Wednesday and the race for the final spots will continue Thursday. Of the group, only Montreal will play their final two games against teams currently in playoff positions – the Washington Capitals and Toronto Maple Leafs.

For the second straight year, the Bruins will hold home-ice advantage in their first-round matchup with the Maple Leafs. Last year, the Bruins took a 3-1 series lead before winning in Game 7. Boston currently has the third-best record in the NHL this season, while the Leafs sit fifth in the league standings.

With two games to go, the Washington Capitals have a three-point lead on the New York Islanders for first place in the division. Should the Capitals clinch the division for a fourth straight year, they will host the top wild-card team.

The Islanders, meanwhile, could fall as far as that top wild-card spot as they own a four-point lead over the Carolina Hurricanes with a matching ROW of 42. If the playoffs started today, the Islanders would host the Penguins in a battle of the division's second- and third-place teams. New York will close out the season on the road against the Florida Panthers Thursday and the Washington Capitals Saturday.

Like the Eastern Conference wild-card spots, the Central Division could very well come down to the final night of the season.

The Winnipeg Jets currently sit first in the division and have jockeyed for the spot with the Nashville Predators for most of the year. On Wednesday, however, the St. Louis Blues will have the chance to equal both the Jets and Predators with 96 points through 80 games. The Blues sat last in the Western Conference in early January, but thanks to a remarkable surge have clinched a playoff spot and are now looking to improve their position.

The top spot in the division will be coveted by all three teams, since the two that miss out will end up facing each other in the opening round. The team that claims first place will likely host the Dallas Stars who, with 91 points, could still rise as high as the third seed in the division. In the overall league standings, the Jets and Predators are currently tied for ninth, the Blues sit 11th while the Stars are 16th.

The Flames have clinched the top spot in the Western Conference with 107 points this season. The Flames will most likely meet the Colorado Avalanche in the first round with the Avs needing just one point - or a loss in any fashion by the Arizona Coyotes - to clinch the second the wild-card spot. The Avalanche could move as high as the top wild-card spot, but will need four points in their final two games and two regulation losses by the Stars to move up.

In the overall standings, a matchup between the Flames and Avalanche would be No. 2 vs. No. 17, with the Flames owning a 3-0 record against Colorado this season.

Thanks to the ROW tiebreaker, the Sharks, who currently have a four-point lead on Vegas, have clinched home-ice advantage for this first-round series. San Jose will, however, enter it as one of the coldest teams in the league with just a 1-8-1 record over their past 10 games.

The Golden Knights, meanwhile, have an 11-4-2 record since adding Mark Stone at the trade deadline and defeated the Sharks in the six games in the second-round of the playoffs last spring.

Looking at the overall league standings, the matchup between the two teams will pit No. 7 vs. No. 15.