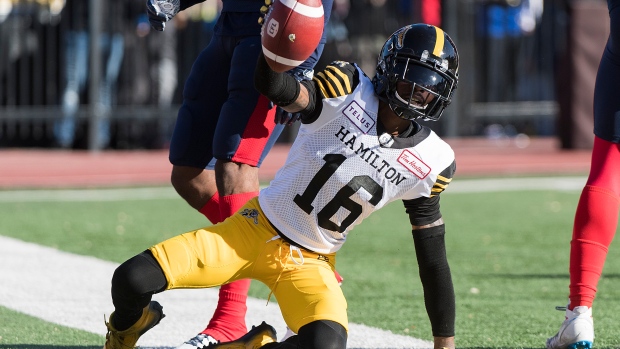 Every once in a while, a football team has a season where everything just clicks.

Which is what happened for the Hamilton Tiger-Cats in 2019.

The Tiger-Cats had their first 15-win season in franchise history, scoring the most points and allowing fewest of any team in the CFL.

Not even a season-ending injury to starting quarterback Jeremiah Masoli during the seventh game of the season could slow the Ticats down, with second-year pro Dane Evans executing the offence at a consistently high level.

So no wonder the Tiger-Cats rode into Calgary a very confident bunch as they prepared to face the Winnipeg Blue Bombers in the 107th Grey Cup game.

Hamilton’s only defeat since Aug. 1 had been a one-point loss to Calgary in September. Otherwise, it was an unblemished final 12 games of the regular season and a comfortable win in the East Division Final over Edmonton, making the Ticats prohibitive favourites over Winnipeg.

All of that changed over the course of three hours as the Blue Bombers dismantled Hamilton, snapping the league’s longest Grey Cup drought and bestowing that distinction on the Tiger-Cats.

Three fumbles, two interceptions and six sacks surrendered added up to the worst offensive performance of the season. Hamilton’s 12 points scored in the Grey Cup game was the fewest they scored in any contest all season. And the 33 points they surrendered was their third-highest total of the year. The final score of 33-12 was an almost exact reverse of the 33-13 beating the ‘Cats laid upon Winnipeg at the end of September.

Somehow, this well-oiled machine malfunctioned at the worst possible time.

That bitter ending to the season aside, there was a whole lot to like about the Tiger-Cats in 2019, including the emergence of Evans, giving Hamilton the CFL’s strongest quarterback duo heading into the 2021 season.

Evans, who had just 42 pass attempts during his rookie season of 2018, completed 72.2 per cent of his passes while throwing 21 touchdowns and just 13 interceptions in relief of Masoli.

The Tiger-Cats had double digit sacks from defensive linemen Ja’Gared Davis and Dylan Wynn, and thousand-yard receiving seasons from Brandon Banks and Bralon Addison, with Banks being named the league’s Most Outstanding Player. Linebacker Simoni Lawrence had a career-high 98 tackles.

How a layoff of 20 months will affect a team that was performing so well for most of 2019 is impossible to say.

But Hamilton is approaching this season by trying to flush all of its memories from 2019, both the good and the bad.

“You study history and you know about it, but that’s gone and it would be gone had the results been different,” said head coach Orlondo Steinauer. “Everything is about looking through the windshield, not the rear view mirror.”

What They’ve Been up to Since We Last Saw Them

The Tiger-Cats have managed to keep most of their team from 2019 together, including getting pending free agent Masoli to return for another season to compete with Evans.

That sets up a compelling training camp battle for the No. 1 job in what is expected to be a wide-open contest.

Evans has proven he’s a capable starter and at just 27 years of age has plenty of upside. Masoli, 32, was playing the best football of his life at the time he suffered an ACL injury and is one of those players who should benefit as much as any from the year off.

Hamilton will need to fill some holes in the secondary, with defensive back Richard Leonard gone to Calgary and perennial all-star Delvin Breaux in retirement.

But given the stability of this roster and coaching staff (with all three co-ordinators returning under Steinauer), and the depth at quarterback, it’s hard to imagine Hamilton not being the team to beat in the East again this season.