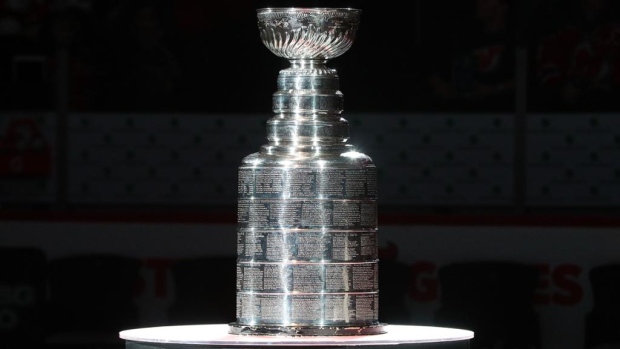 The Hockey Hall of Fame will move forward in the process of having Brad Aldrich's name removed from the Stanley Cup.

"Hockey Hall of Fame Chair, Lanny McDonald, spoke with NHL Commissioner Gary Bettman and Deputy Commissioner Bill Daly today regarding the request from the Chicago Blackhawks to have Brad Aldrich’s name removed from the Stanley Cup," the Hall of Fame said in a statement. "The parties agree that this request is appropriate and that they will have further dialogue, including with the Stanley Cup trustees, on how best to effectuate this request.”

In his letter, Wirtz pointed to the name of Basil Pocklington being covered by Xs on the Edmonton Oilers' 1983-84 plaque as precedent for the move, and requested Aldrich’s name be treated in the same manner.

"Aldrich's involvement with the team during the 2010 season has cast a pall on the players' extraordinary work that year," Wirtz wrote as part of his letter. "The names of some of hockey's most talented athletes appear on the Stanley Cup. But so does the name "Brad Aldrich" whose role as video coach made him eligible for the engraving. His conduct disqualified him, however, and it was a mistake to submit his name. We are sorry we allowed it to happen.

"I am humbly requesting that the Hockey Hall of Fame consider 'X-ing' out his name on the Stanley Cup. While nothing can undo What he did, leaving his name on the most prestigious trophy in sports seems profoundly wrong." 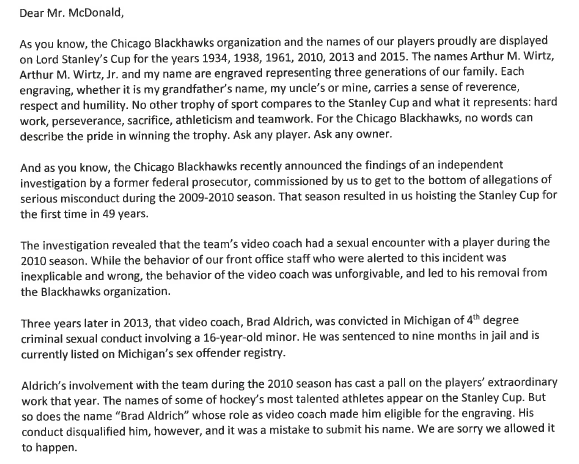 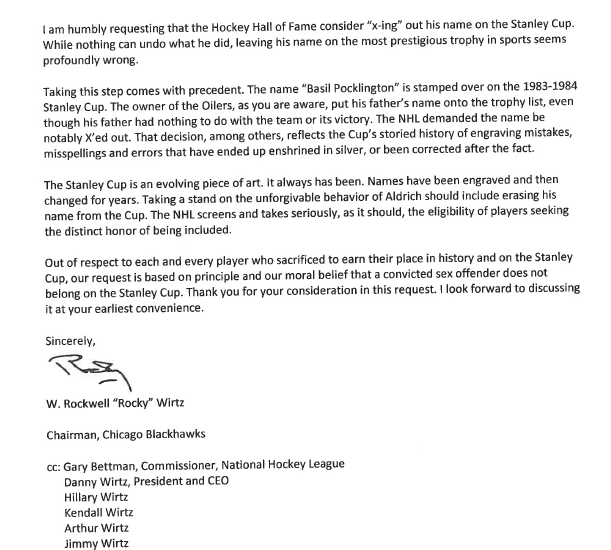 Former Blackhawks prospect Kyle Beach identified himself as the player allegedly sexually abused by Aldrich in 2010 earlier this week after an independent showed members of the organization were made aware of the allegations in 2010 and elected not to act during the team's Stanley Cup run.

“First, we would like to acknowledge and commend Kyle Beach’s courage in coming forward," the Blackhawks said in a statement in response Beach revealing himself as John Doe Wednesday. "As an organization, the Chicago Blackhawks reiterate our deepest apologies to him for what he has gone through and for the organization’s failure to promptly respond when he bravely brought this matter to light in 2010. It was inexcusable for the then-executives of the Blackhawks organization to delay taking action regarding the reported sexual misconduct. No playoff game or championship is more important than protecting our players and staff from predatory behavior.

The Blackhawks have implemented numerous changes and improvements within the organization, including hiring a new leadership team that is committed to winning championships while adhering to the highest ethical, professional, and athletic standards.”

Quenneville resigned from his position as head coach of the Florida Panthers on Thursday after he met with NHL commissioner Gary Bettman. Bowman resigned from his position as general manager of both the Blackhawks and United States men's Olympic hockey team Tuesday, while MacIsaac, the only other member of the group listed still with the Blackhawks, was also dismissed.

Cheveldayoff, who is currently serving as GM of the Winnipeg Jets, met with Bettman on Friday in New York and was not disciplined by the league.