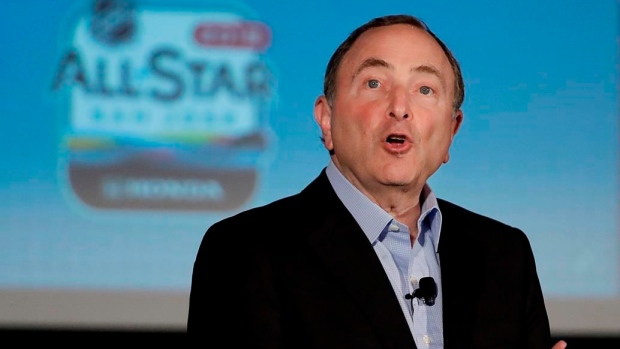 NHL commissioner Gary Bettman said Wednesday that his own guess is the league is most likely to return to play during the summer months.

“My guess at this point is we're probably going to be playing into the summer," Bettman told Fox Business Network, "which is something that we can certainly do.”

The NHL season was paused on March 12 and on Tuesday the league extended its self-isolation recommendation through April 30.

Bettman reiterated Wednesday that no decisions have been regarding a format for the league's return to play. Ottawa Senators general manager Pierre Dorion revealed Tuesday his team has submitted three proposals to the league for restarting the season.

"We're focused on those issues and we have been, and we get a fair amount of lobbying from the clubs because they're extraordinarily competitive," Bettman said. "You're exactly right, our competitive balance is so extraordinary. There are at least seven teams that were on the bubble of making the playoffs and not all of the teams have played the same number of games. Whatever we do to come back ­– and this is where I'm talking about being agile and flexible – we're going to have to do something, whether it's complete the regular season in whole or in part, whether or not it's expanded playoffs, we're going to have to do something that's fair and has integrity. That's going to be very important, no matter what it is we do.

Dr. Anthony Fauci, the United States’ top infectious diseases expert, said on Wednesday that professional sports could resume in the summer without fans if players were kept in hotels.